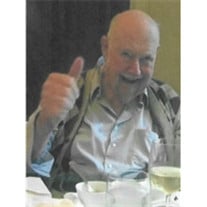 Alan R. Young 1928-2019 Alan died on January 30, 2019 in Napa at the age of 90 in the company of his chosen family. Mr. Young was a native of Bakersfield, where at the age of 15, he went to work for radio station KERN, serving as an announcer, disc jockey, newsman, engineer, and producer. Mr. Young played a prominent role in the broadcasting industry in the earlier part of his life and later spent over four decades of active and reserve service in the U.S. Navy and Coast guard. His work brought him into contact with many of the greats of the entertainment industry and well-known dance bands involved with radio, television, and the stage. He also had links with important advancements in the technical aspects of the broadcast industry, such as audio tape. He played a part in the introduction of the "new age" of television in 1952 with the installation of the first UHF facilities on the West Coast. Mr. Young was also associated with the introduction of: KPIX, KMJ-TV, KFBK-FM and KFBK-FM, KUDA-TV, and KFTY-TV. During the 1948 presidential campaign, he rode aboard the Truman campaign train and was editing engineer for the American Broadcasting Companys series of "Candidates Express" programs. Later Mr. Young was associated with a number of radio, television, and live stage presentations, ranging from "Dragnet" to Liberace and the Olsen & Johnson comedy revues. Mr. Young flew a 1928 open-cockpit Fleet Biplane and for two summers participated in aerobatics air shows in Northern California. During his military service he served aboard Navy destroyers and destroyer escorts, Coast Guard medium and high endurance cutters, and patrol boats. Shore duties included public affairs, recruiting, and commanding a port security reserve unit for the waterside protection of San Francisco Bay. Time was also spent as an aide to numerous flag officers. Later, he became a Merchant Marine Captain and over many years had been honored for the extensive amount of time devoted to community service. He also served as general manager of an outside telephone company and was instrumental in gathering people together for a Napa Valley cablevision system. Mr. Young was a resident of Napa from 1963 to 1998 and later lived in Glen Ellen in Sonoma County. He was a member of the Rotary Club of Napa, Napa County Disaster Preparedness Committee, and served on the Napa City Council. He was a member of the Napa County Juvenile Justice-Delinquency Prevention Commission for 15 years and served seven years as its chairman. Active in the Napa Chamber of Commerce, he served on many committees, devoting much time to the Ambassadors and Military Affairs Committee. He was a leader of the Napa Sea Scouts for 32 years and was presented with the coveted Silver Beaver Award in Scouting for his achievements. He was a member of the Fresno Masonic Lodge and Fresno Scottish Rite and was a past president of the Napa Parlor, Native Sons of the Golden West. He was also a member of the Governing Board of the Bay Area Broadcast Legends. He was "on the air" with two radio shows on KSVY, a community radio station in Sonoma, playing material from the period of 1930 through the 1960s. He was active as a producer and director with Napas television channel 28, marking 75 years of commercial broadcasting association. He was active as an amateur radio operator with the call sign of K6KLL and associated with three local clubs as well as several national organizations. Alan is survived by his close friend and companion Sanford Smith, and his god-son Steve Wilson and honorary god-daughter, Lola Barnes. No services are planned. Funeral Home: Treadway & Wigger Funeral Chapel 2383 Napa-Vallejo Highway Napa, CA US 94558

Alan R. Young 1928-2019 Alan died on January 30, 2019 in Napa at the age of 90 in the company of his chosen family. Mr. Young was a native of Bakersfield, where at the age of 15, he went to work for radio station KERN, serving as an announcer,... View Obituary & Service Information

The family of Alan Richard Young created this Life Tributes page to make it easy to share your memories.

Send flowers to the Young family.