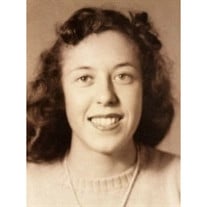 Jo passed away on April 27, 2019 in Napa with her loving family by her side. Born January 12, 1932 in Edgemont, Arkansas to Louis Stoneking and Mavis Rollins Gribble. Jo graduated from Heber Springs High School in 1950. Upon completion of high school, Jo became a school teacher, just like her mother. Later she moved to Wichita, Kansas, where she worked at Boeing Aircraft Manufacturing Co. Here she met her husband James Russell. Later in 1958, Jo and her family moved to Napa, CA, where she later worked at Mare Island Naval Shipyard for 28 years as a procurement specialist. Here Jo received many awards and achievement recognitions for her work ethic. She retired from Mare Island in 1995. Jo mainly loved spending time with her family, more specifically spoiling and cooking for her grandchildren. She enjoyed shopping with her granddaughters, was an avid reader, and enjoyed watching the Sacramento Kings play basketball on TV. Jo was predeceased by her parents, ex-husband James Russell, and brother Henry Leonard "Lennie" Gribble. She is survived by her three sons, Gregg Russell (Nelsa Russell), Mark Russell, and Scott Russell (Angelica Russell); her grandchildren Melissa Broadway (Trayvone Broadway), Breanna Russell, Alyssa Russell, and Dallas Russell; her great-grandchildren Ahrionna Broadway and Ahrion Broadway; and her brother Thomas Carl Gribble. She is also survived by her nieces and nephews, Tammy Scorza, Doug Gribble, Kim OMalley, and Mike Gribble. Jo was a kind, sassy, and humorous woman; a beloved mother and an amazing grandmother that will be deeply missed by all. Her service will be held on Saturday May 11th at 1pm at Napa Valley Memorial Park. Funeral Home: Treadway & Wigger Funeral Chapel 2383 Napa-Vallejo Highway Napa, CA US 94558

Jo passed away on April 27, 2019 in Napa with her loving family by her side. Born January 12, 1932 in Edgemont, Arkansas to Louis Stoneking and Mavis Rollins Gribble. Jo graduated from Heber Springs High School in 1950. Upon completion of high... View Obituary & Service Information

The family of Atha Jo Mallare created this Life Tributes page to make it easy to share your memories.

Send flowers to the Mallare family.