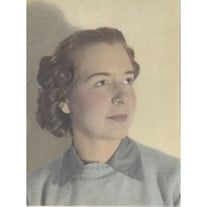 Betty Jane Anderson passed away May 17, 2013, in Napa, California. Betty was born on July 7, 1921, in Philadelphia, Pennsylvania, the youngest child of Christopher and Alice Herron, founding members of the Volunteers of America, a Christian service organization similar to the Salvation Army. Betty's lifelong dedication to helping others was born while ladling soup to the poor of Philadelphia during the Depression. When Betty was in her early teens, Mrs. Herron took Betty and her sister, Alice, to Bisbee, Arizona, to manage a children's home while Mr. Herron took an assignment in California. In 1936, the family was reunited and lived in Burlingame. Betty attended the Academy of Fashion Design in San Francisco, graduating in 1939. One of her teachers was the renowned Edith Head. In 1940, Betty married Stanley France, Sr. They had two children, Georgia, who died in infancy, and Stan, Jr. In 1956, Betty married Ben Anderson and gained three additional children. Ben and Betty began their married life in Vallejo, moving to Napa in 1959. They celebrated their 56th wedding anniversary in January 2012, shortly before Ben's death. Betty had a rich and varied working life. She had a gift for sales and worked in both retail and direct venues, including Singer Sewing Machine, Penney's, and Albert's Department Store, and as a Tupperware Sales Manager. She was also the proprietor of And Also Antiques which opened on Main Street in Napa and moved in 1966 to become one of the first shops in the newly developed Vintage 1870 in Yountville. A gifted artist, Betty was a painter, a sculptor, an accomplished seamstress, and enjoyed arts and crafts of all kinds, for which she won numerous blue ribbons at the Napa Town and County Fair. Her Christian faith and early training led her to serve others in many ways: she taught Sunday School, was a 4-H leader, volunteered with developmentally disabled children, opened her home to foster children, and was always available as chauffeur to anyone who needed a ride. She was very active in her church, was president of her mission society circle, worked in the church food pantry, and continuously performed other acts of kindness. She was a committed Christian and always wanted to share her faith. Betty, affectionately known as "Nana" by her family members, was proud to be the mother of four children, eight grandchildren, and sixteen great-grandchildren. She was thrilled to learn recently that there would be another great-grandchild in December. Betty was predeceased by her husband, Ben, her parents, brother Christopher "Bud" Herron, and sisters Kathleen France and Alice Corder. She is survived by her children Stan France, Loreen and Jim Schallon, Paul and Patrina Anderson, and Sharon and Steve Bull; grandchildren Micol Ritter, David Schallon, Greg Bull, Rachel Ghezzi, Tim France, Patrina Eichman, Sarah Brown, and Rebecca Josifek; and great-grandchildren Jacob France, Abigale France, Kerrigan Bull, Natalie Bull, Jesse Ritter, Audrey Schallon, Stella Schallon, Annie Eichman, Simon Eichman, Jaypheth Eichman, Gabriella Eichman, Jeremiah Brown, Josiah Brown, Lydia Josefik, Titus Josefik, and Antonio Ghezzi. She is also survived by many nieces, nephews, and friends. A memorial service in Betty's honor will be held at 2:00 p.m. on Saturday, June 1st, at the Napa Valley Baptist Church, 2303 Trower Avenue, Napa. Betty will be buried in a private ceremony at the Sacramento Valley National Cemetery in Dixon. In lieu of flowers, the family suggests donations in Betty's memory be made to the Building Fund at Napa Valley Baptist Church, 2303 Trower Avenue, Napa, CA 94558. Memories may be shared with the family at treadwaywigger.com.

Betty Jane Anderson passed away May 17, 2013, in Napa, California. Betty was born on July 7, 1921, in Philadelphia, Pennsylvania, the youngest child of Christopher and Alice Herron, founding members of the Volunteers of America, a Christian... View Obituary & Service Information

The family of Betty Jane Anderson created this Life Tributes page to make it easy to share your memories.

Send flowers to the Anderson family.