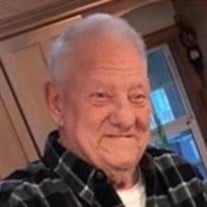 Christopher H. Crowhurst 1942 - 2020 Christopher Henry Crowhurst, 77, of American Canyon, and former long-time resident of Linden, New Jersey, passed away peacefully May 3, 2020 at a local care home in Napa. Born November 24, 1942 in Newark, NJ he was the son of the late Walter Henry and Elenora Elizabeth Gibbert Crowhurst. Chris grew up in the small community of Linden where he attended local schools and later served as custodian at the McManus Middle School for more than 30 years. An avid sports fan, Chris supported all things Notre Dame football and NY Yankees baseball, and in off hours could always be found at his favorite hangout—the Linden Bowl. A fixture at the popular bowling alley for years, after his move west Chris was affectionately given the nickname “Cowboy” after returning for visits sporting western wear. Moving to Napa Valley some fifteen years ago to live with his sister, Chris had a penchant for Lottery Scratchers—not to the harm of himself, but certainly a source of enjoyment! Chris also enjoyed any opportunity to go to nearby casinos and take in the excitement and environment. Being close to family in his later life was important to Chris and he is remembered as a gentle, generous and thoughtful man. Chris was preceded in death by his beloved parents and his twin brother Thomas. He is survived by his sister, Judy Leporiere of American Canyon; niece Bonnie Leporiere and her wife Penny Hicks of Napa; nephew David Leporiere and his wife Julie of Carmichael, CA; his brother Tom’s wife Judy Crowhurst and their sons: Andrew Crowhurst and his wife Jen of Easton, PA, and Tim Crowhurst and his wife Ernestine of Jamesburg, NJ. Chris also leaves a number of loving cousins, and great nieces and nephews. A private committal service will be held at a later date at Clover Leaf Memorial Park in Woodbridge, New Jersey where Chris will be laid to rest near his beloved mother.

The family of Christopher Henry Crowhurst created this Life Tributes page to make it easy to share your memories.

Send flowers to the Crowhurst family.