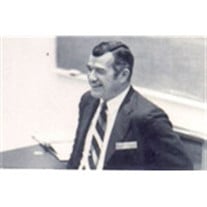 "Fantastic!" was Judge Donald R. Fretz's response to any queries of "How are you?" In his later years, he was also known for launching into a memorized recitation of the complete Gettysburg Address. He last recited it 12 hours before his death,... View Obituary & Service Information

The family of Donald Robert Fretz created this Life Tributes page to make it easy to share your memories.

&quot;Fantastic!&quot; was Judge Donald R. Fretz&#39;s response to any queries...

Send flowers to the Fretz family.