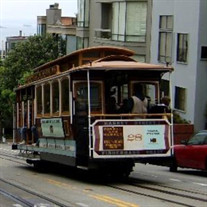 Born in New York City to Helen Lyon and Raymond Haagstad, Don embraced life and living to the fullest. Perhaps more than anything else that imprinted on all who knew Don was a naturally bright and strikingly heartwarming smile that spoke at once of all he was… a kind and gentle soul who was as generous as he was genuine in his spirit of love, caring and compassion. Unflappably calm and deliberate, he exemplified the best of human character, quietly imparting wisdom, patience, a quick wit, an inner strength and integrity, as well as an ever-present devotion to family and friends… all alongside an unparalleled zest for the myriad pursuits and passions of his life. Among many hats he wore…. those of a student at the New York School of Performing Arts, trombone player in five Macy's Day parades, model, inventor, Travis Air Force Base mechanic, motorcycle and racing enthusiast, sailor (racing sailboats in the Caribbean), boat captain (traveling anywhere "water"), and former Superintendent of the San Francisco cable car system… he was also known through a successful food truck business as the "Divco Dog Chef!" Don took particular pride as a father to his beloved daughter, Dawn, and loved his extended family. And the "3 B's" in his life remained a constant: "bikes, boats, and wife Beth." Blessed by a bond of love and commitment over the span of 28 years, Don and Beth were intensely devoted and loving partners. Together, they gave of their time and talents to no end, whether with friends and family or community functions. On a more sentimental and patriotic note, no matter where Don was, he always stood during the anthem before a game or race. He happened to depart the world on January 6th, 2021, a day of unrest at the nation's capitol that would have upset him deeply. On a lifelong spiritual journey, Don was a man of few words, but when he spoke, he was always respectful and eloquent. He almost invariably said whatever he had to say with what one friend called that "delightful smile (that) graced his face all those many years." In comforting Beth, another friend said "Grief will fade over time, but the sweetness that was Don will remain forever." He will be acutely missed but ever-present. Don is survived by his wife of 25 years, Beth Bevington-Haagstad, daughter Dawn Haagstad and son-in-law Matthew Ridgway, brother-in-law John Day, many loving cousins, and untold adoring and heartbroken friends.

Born in New York City to Helen Lyon and Raymond Haagstad, Don embraced life and living to the fullest. Perhaps more than anything else that imprinted on all who knew Don was a naturally bright and strikingly heartwarming smile that spoke at... View Obituary & Service Information

The family of Donald Christopher Haagstad created this Life Tributes page to make it easy to share your memories.

Send flowers to the Haagstad family.