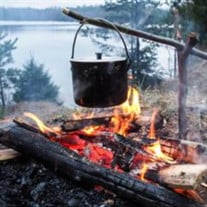 Donna Grace Cave passed away peacefully at the age of 92 on November 11, 2020 in Napa. Donna Grace Gunthorp was born in San Francisco on October 5, 1928 to Donald and Guinevere Gunthorp. A third generation native San Franciscan, Donna graduated from George Washington High School in 1945. In 1960, she graduated cum laude from San Francisco State College, earning a Bachelor of Arts degree. Donna worked as a social worker for the county of Napa before moving to San Jose to continue her work in the county of Santa Clara. By 1969 she was a Social Work Supervisor focusing on services for disabled adults, focusing particularly on the blind community. She retired in 1984 after 25 years of service. In 1957 Donna married William ("Bill") Cave. They made homes in San Francisco and Corte Madera before settling down in San Jose in 1960 with their two children. After retiring from Santa Clara County, Donna and Bill moved to Napa where they transformed her father's fishing cabin on the Napa River into their permanent home. It would be their home for the next 24 years. After the death of her husband Bill, Donna moved to The Springs of Napa where she regularly played Mahjong and Bridge. Continuing her life of service, Donna was an active volunteer for Napa Community Projects for an impressive 25 years. During that time, she enjoyed golfing and was a member of Napa Valley Country Club. She was thrilled to have made a hole-in-one on the 15th hole. Donna was also an avid camper. She traveled throughout the western United States, Mexico, and Canada with her husband. Donna was predeceased by her sister Guinevere ("Guin") Warnock, her brother Robert ("Pete") Gunthorp and husband William Cave. She is survived by her daughter Tracie Robinett of Windsor, son Trent (Loralin) Cave of Napa, and sister-in-law Janet Mobley. She also has four grandchildren: Zac Cave of Truckee, Courtney (Jonathan) Wagoner of Windsor, Caitlin (Joshua) Jachimowicz of Morgan Hill, and Sam Cave of Arizona; two nephews, three nieces, and five great-grandchildren. The family wishes to thank Sandra Brown, the staff of Continuum Care Hospice, and Brookdale of Napa for taking such good care of Donna in her final days. Donna will be buried with her husband at the Sacramento Valley National Cemetery. Due to current health restrictions, services will be private, with plans for a memorial at a later date.

The family of Donna Grace Cave created this Life Tributes page to make it easy to share your memories.

Donna Grace Cave passed away peacefully at the age of 92 on November...

Send flowers to the Cave family.