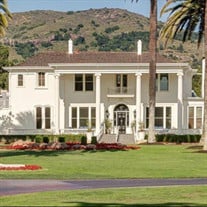 Donna Cheryl Foureman passed away peacefully on January 8, 2021, after a several-month struggle with metastatic breast cancer. She is survived by her husband William C. (Bill) Foureman of Napa, her niece Suzanne Carpenter of Livermore (Douglas) and nephews Stephen Mayhugh, Patrick Pickerell (Debra), and Randall Pickerell (Thelma Rodriques), all of Pleasanton. She was predeceased by her parents Clarence and Alice Smith and her sister Shirley Cotten. Donna Foureman spent her early years in Stanberry, Missouri, a rural community in the northwest of the state. She lived on a truck farm without indoor plumbing until the family moved to town when she entered high school. Her parents had third-grade and sixth-grade educations but were exceptionally hard-working, honest, kindly, well-organized and devout, and they instilled all but the last of these attributes in Donna to a notable extent. Donna graduated second in her class of 49 at Stanberry High School. After her first summer job between Junior and Senior years of high school, she turned down an offer from the factory she had worked at to join their management team. Her ambition had been to become a home economics teacher, but the family could not afford college. Instead, Donna attended secretarial school in Kansas City, learning among many other things to type nearly 200 words per minute. While in Kansas City Donna met and married a military veteran who was on his way to take a job with Boeing in Seattle, Washington. By dint of good luck, her first job interview in Seattle was with The Procter & Gamble Company sales office. She landed the secretarial job in 1969, beginning a 37- year career with Procter & Gamble. Her performance in that job was so exceptional that she earned a very rare promotion to management level in 1979, becoming a peer of top college graduates. She divorced in 1979 and moved to Denver to become manager of the sales office there. Over the next decade and a half she managed a succession of sales offices in Minneapolis, Kansas City, Chicago and San Ramon, California. In 1994, while on a business trip to company headquarters in Cincinnati, Ohio, Donna met her husband-to-be, Bill Foureman, at the home of her manager Lynne Burnett, a close friend of hers with whom she stayed when in town. As kind fate would have it, Bill, a Procter & Gamble in-house labor and employment attorney, was close friends in Cincinnati with Lynne and her husband and was newly divorced. Donna and Bill first bonded over a Patsy Cline album in Lynne's living room. Donna and Bill embarked on a long-distance relationship, but kind fate immediately intervened again. Scarcely a month after they first met, Donna was promoted into Lynne's job and soon moved to Cincinnati. From that point forward Donna and Bill were inseparable. They became engaged at midnight on December 31, 1999 and were married in 2000 at Landmark Vineyards in Sonoma County. Donna continued working at Procter & Gamble for another decade, eventually serving as the company's foremost expert on smoothly executing downsizing and reorganization programs. After 37 years she had had quite enough of working, and she and Bill retired together at the end of 2006 and moved to Napa in 2007. They immediately joined the Silverado Country Club and the Club remained the focus of Donna's life from that time forward. Her knack for leadership soon became apparent, and in the following years she participated in founding the Striking Ladies golf group, she served three years as captain of the Women's Golf Association, and in 2018 she was elected to a three-year term on the Board of Directors of the Silverado Country Club, which her illness cut short. In all her positions she effectively cleaned up inherited messes and placed her organization on an improved footing. Donna was regularly seen in the Silverado Members Clubhouse, where she came to know more people than practically anyone else in the Club. By dint of persistent salesmanship she sold thousands of dollars of $5 and $10 entries in the Club's Super Bowl lottery every year. Numerous members attest that they met Donna early in their club membership, typically at the bar in the Clubhouse, and that they truly appreciated the way her friendly and welcoming approach made them feel at home as new members. Donna liked nothing better than to sit with Bill at restaurant bars and get to know the bartenders on a personal level. Service workers throughout the Valley loved her for her friendly manner and utter lack of condescension. All in all, Donna's was a quintessentially American story of rising from humble beginnings to success and happiness due to hard work and solid values. Her many friends sincerely mourn her loss. Current COVID restrictions preclude a proper funeral. When large gatherings are again permitted there will be a public Celebration of Life for her at the Silverado Country Club Members' Clubhouse.

Donna Cheryl Foureman passed away peacefully on January 8, 2021, after a several-month struggle with metastatic breast cancer. She is survived by her husband William C. (Bill) Foureman of Napa, her niece Suzanne Carpenter of Livermore (Douglas)... View Obituary & Service Information

The family of Donna Cheryl Foureman created this Life Tributes page to make it easy to share your memories.

Send flowers to the Foureman family.