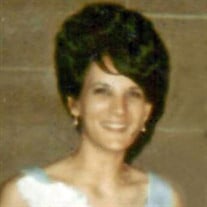 Edith Monica Simich Scribner 1945 - 2021 It is with great sadness that we announce the passing of Edith Monica Simich Scribner on Wednesday December 8th 2021. Edith was born in Oakland, California on June 20th 1945 to Myron and Marjorie Simich. In 1946 the family moved to Napa, CA where Myron and Marjorie purchased Smith’s Memorial & Cut Stone. Edith attended St. John’s Catholic School and graduated in 1959. She then continued on to St. Vincent Ferrer High School in Vallejo catching the bus every morning in front of the St. John’s Hall. At St. Vincent’s she was on the Honor Roll, she was a member of the Senior Cabinet and was on the Apostolic Committee, graduating in 1963. Napa Junior College was her next step in her education receiving an AA degree in Business. Edith then attended California State University at Chico where she graduated with her degree in Business Administration in 1968. Along with her diploma, she received a letter of congratulations from our President Lyndon Johnson and also from Governor Ronald Reagan. During her working career she was employed at Short’s Flower Shop on First St. in Napa where she made lifelong friends. Edith then landed a job at the new Humble Oil Refinery in Benicia and became a purchaser of products for petroleum refining. “Put a Tiger in Your Tank!” Was the company’s slogan! While working at Humble Oil she met and married Don Scribner and became stepmom to three wonderful children, Susie, Francine and Donny Jr. A move to Baytown,Texas was in their future where Edith and Don both worked at the refinery which was one of the largest in the United States. After 5 years of missing California they moved back to Walnut Creek and continued working for the new company Exxon. Edith took great joy in raising her step children, guiding them through Catholic school and on to adulthood. Sadly Donny Jr. passed away in 1987 which was heartbreaking to everyone, but especially to Edith because he was her little boy. Edith continued on, raising Suzy and Fran with Don. Edith was diagnosed with Multiple Sclerosis in the early 1990’s. After many years at home, Edith’s battle with MS proved too difficult for Don to care for her. Edith was moved to a nursing home in Walnut Creek, where she was able to have many visitors. Edith was still able to find joy in life and spoke with her Mom at least once a day if not twice a day until Marjorie passed in 2013. Edith’s friends from childhood through college were wonderful, visiting her, sending cards, letters, and emails. Edith bravely battled MS for over 20+ years; her body gave in to the ravages of this horrible disease on Dec. 8, 2021. Her brother, Stephen and his wife Margaret were with her shortly before she passed. She will be missed greatly. Edith is survived by husband Don, stepdaughter Francine, grandsons Josh, Ben and Anthony, her brother Stephen, sister in law Margaret, sister in law Sue, niece Audrey (Sparks, NV), nephews, Nick, Myron and Frank. Cousin, Karen Tyler, a retired RN who was of great assistance in overseeing Edith’s care the last 7 years, Lynn Wilmes, Patricia Stahl, Mary Brink and many other cousins. She was pre deceased by her parents Myron and Marjorie, brothers; Eddie, Vincent, and David, Sister in Law Renee, baby sister Yvonne, stepson Donnie, and stepdaughter Suzy. Edith Simich was a woman of great elegance and class and will be missed by all. Memorial Service will be 11:00 am Tuesday, Dec. 21, 2021 at the Holy Cross Catholic Cemetery Chapel, 2121 Spring St. in St. Helena, with graveside services immediately following. The family asks that memorials be made to any organization of aid to those afflicted with MS. Treadway & Wigger Funeral Chapel is serving the family and friends may offer condolences at treadwaywigger.com

The family of Edith Monica Simich Scribner created this Life Tributes page to make it easy to share your memories.

It is with great sadness...