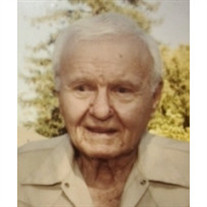 Elwood Fry 1922 - 2017 Elwood Clement Fry, 94, of Napa, formerly of Vallejo, died peacefully Feb. 8, 2017 at his home. Born Oct. 11, 1922 in San Gabriel, California, he was the son of the late Orville Clement and Jessie Mae Harrier Fry. He was a graduate of Alhambra High School where he met Betty Lee Dugginsthe love of his life. The couple married on Aug. 18, 1942 and soon after Elwood began his service in the U.S. Army Air Corps. Betty followed stateside to Las Vegas and Texas until Elwood was sent overseas to serve in the European theatre. Elwood flew more than 29 missions over enemy territories as a turret gunner in a B17 attached to the 3021st AAFBU. He was honorably discharged a Staff Sergeant on Oct. 14, 1945 and returned home to southern California aboard the Queen Mary. Elwood and Betty made their home in Vallejo in 1946 where Elwood found work as a machinist at the Mare Island Naval Shipyard. He retired after thirty-eight years service. In later years the couple enjoyed salt water fishing and travelCrescent City a favorite destination. In 2001 the couple moved to Napa. Known to neighbors as "Woody", Elwood remained a sharp, self-sufficient, strong man until the endshying away from modern devices and still enjoying television news and a crisp newspaper in his hands. Elwood was preceded in death by his son David Lee Fry, his beloved wife of 70 years Betty Lee Fry, and siblings Mary Ann and Don. He is survived by his son Thomas, his wife Minnie, their daughter Amber, and her husband David. Also surviving are Amber and David's children: Taylor, Connor, Cody, and Taytum; and Elwood's sister Martha, and her husband Bob. The family will receive friends from 1:00 3:00 p.m. Friday, Feb 17, at Treadway & Wigger Funeral Chapel, now on the grounds of Napa Valley Memorial Park, 2383 Napa-Vallejo Hwy. Military honors will be offered at 2:00 p.m. Private committal will be at a later date at the Sacramento Valley National Cemetery in Dixon. Funeral Home: Treadway & Wigger Funeral Chapel 2383 Napa-Vallejo Highway Napa, CA US 94558

The family of Elwood "Woody" Clement Fry created this Life Tributes page to make it easy to share your memories.

Send flowers to the Fry family.