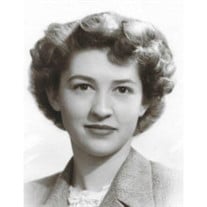 Esther Elizabeth Emmel passed away on August 31 at the age of 90 in Napa, CA. With pride in her familys history, a lifetime of music, wonderful sense of humor, classy-stylin clothes, patience (mostly!) raising five kids and their pets, she was always with us, always game for some funshe was the core of our family. As three of her grandsons wrote, Esther was "the most loving and humorous spark plug of a grandma there ever was." Esther was born in a small stone house in Jordan Valley, Oregon to Harold and Edith Skinner. The old stone house still stands and is now a popular coffee shop on the road from Winnemucca to Boise. She was the great-granddaughter of Silas Skinner, originally from the Isle of Man and head of a pioneer ranching family in Jordan Valley. Silas Skinner also owned property where he raised horses on Big Ranch Road in Napa, now home to the Biale Vineyard. One of his sonsEsthers grandfather, Williammarried Ella Sackett of Napa . Her family moved from Jordan Valley to Caldwell, Idaho when she was four years old. Esther had many happy memories of growing up there. She remained in Caldwell to attend the College of Idaho, where she studied music and was an accomplished pianist. While at the college, she met Don Emmel, whom she married in 1951. Don became a Presbyterian minister. Through the years they lived in Oregon, San Jose, Maryland, Connecticut, Napa, Long Beach and, finally, retirement in Napa. Esther taught piano for many years and greatly enjoyed accompanying choirs, soloists, and instrumentalists. She passed on her love of music by encouraging each of her five children to learn a musical instrument. In later years, she and a good friend had fun playing many four-hand piano "gigs" for different events and womens groups in the Napa Valley. She enjoyed several cross country trips with the family, camping and visiting national parks along the way. She loved cooking and entertaining guests. She was also active in garden clubs, music clubs, the American Association of University Women, and PEO. Esther said her first priority and source of satisfaction was always her role as mother to her children, even as she was involved in church and other activities. Esther was preceded in death by Don. She is survived by her children: Tom Emmel (Katya Dovgan) of Baltimore, MD; Pat Swarts (Jeffrey) of Danville, OH; Kathy Holcomb of Woodland, CA; John Emmel (Anne Keller) of Palo Alto, CA; Mary Cooper (Malcolm) of Westerly, RI; nine grandchildren, two step-grandchildren, and ten great-grandchildren. She will be missed by her family and many friends. A celebration of Esthers life will be held on October 19 at 1:00 pm in the St. Helena Presbyterian Church, 1428 Spring Street, St. Helena, CA. A private committal will take place in Tulocay Cemetery in Napa, CA. Treadway and Wigger Funeral Chapel of Napa is serving the family. In lieu of flowers, the family asks that donations be made in her name to Chamber Music in Napa Valley, the American Heart Association, or the National Wildlife Federation.

Esther Elizabeth Emmel passed away on August 31 at the age of 90 in Napa, CA. With pride in her familys history, a lifetime of music, wonderful sense of humor, classy-stylin clothes, patience (mostly!) raising five kids and their pets, she was... View Obituary & Service Information

The family of Esther Elizabeth Emmel created this Life Tributes page to make it easy to share your memories.

Esther Elizabeth Emmel passed away on August 31 at the age of...

Send flowers to the Emmel family.