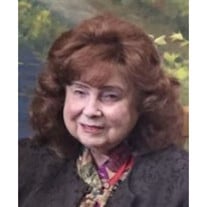 Barbara left this world to go dance with Jesus, her best friend, on November 1, 2018. She was born to Caroline & Bernard Rotz at their home on May 24, 1930. Much of her early life was spent in multiple church activities and playing music. She began playing piano at age 8 and later the accordion. She was baptized in Lake Michigan at age 5 and started playing piano for church at age 10. Music was always a part of her life, spending many years teaching accordion in Arizona and continuing to play for others in churches and nursing homes up until age 87. Many of her students continued to have contact with her over 50 years later and she was delighted many of them were Christians. She married John Hartley on June 1, 1947 in Benton Harbor. In 1949 son John Stephen was born and in 1952 daughter Janice was added. Her children grew up in Prescott, AZ. Her career outside of music was as a legal secretary in the courtroom and working for attorneys until age 80. She and John divorced in 1978 but remained lifelong friends. In 1992 she married good friend Bill Truax. They loved traveling and music and she brought him to the Lord before his passing 6 years later. Johns second wife, Gloria, was her close friend and a large part of her care team in her last weeks. The family is so grateful for her loving care. Barbara is survived by son Steve Hartley and wife Kay, daughter Janice Clifton and husband Jon. Grandchildren John and children Elena, Evan and Kyle, Jennifer Washington (Albert) and children Brandon, Jasmine, Jaden, Jordan, Jenica and Brandons daughter Kaiya, Tom (Paola) and children Ariel, Kole and Tiago, brother Russell (Bernie) and friend Gloria. She was predeceased by grandson Phillip, sister Maxine and John Hartley. Her personal relationship with Jesus was the pivotal point of her life and all she did. Her love of family was unsurpassed. Her friends were friends for life and she requested her daughter continue to pray for them so they could join her in Heaven. Her family misses her so much but are glad she is free from pain and free to dance. Services will be held on Friday November 23rd at 3:00pm at Open Door Church, 3353 Broadway, American Canyon, CA. Funeral Home: Treadway & Wigger Funeral Chapel 2383 Napa-Vallejo Highway Napa, CA US 94558

Barbara left this world to go dance with Jesus, her best friend, on November 1, 2018. She was born to Caroline & Bernard Rotz at their home on May 24, 1930. Much of her early life was spent in multiple church activities and playing music. She... View Obituary & Service Information

The family of Eunice Barbara Truax created this Life Tributes page to make it easy to share your memories.

Barbara left this world to go dance with Jesus, her best friend,...

Send flowers to the Truax family.