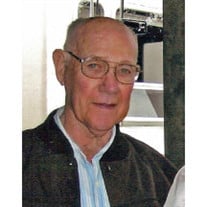 Frank "Hank" Olmstead, passed away May 23, 2017 at the age of 92, just 6 months after losing his wife of almost 70 years, Helen. He was born on July 19, 1924 to Clarence and Louisa Olmstead in Modesto California. Hank's family moved to El Dorado, CA in 1930. He attended schools in both El Dorado and Placerville and worked for the California Division of Forestry during summer vacations. A WWII Veteran he joined the Navy in 1942 at the age of 17 and served until 1946. His family moved to Yountville in 1943 where his father became the Fire Chief until his passing in 1944 at which time his mother took over the duties of Fire Chief. When Hank returned home after his military duties were fulfilled he met the "love of his life" Helen Hill. Both working at The Poultry Producers on Jackson St. in Napa and then married January 12, 1947. Loving father, grandfather, great-grandfather, brother and friend to many. Hank joined the Teamsters local 490 in 1946. He was a truck driver for Merchants Express in Vallejo and later for C-Line Express in Napa where he retired in 1986. A member of the Napa Elks #832, Native Sons #62 and the Yountville Community Church he enjoyed playing golf, pool, camping and sharing time with family and friends. He is survived by his daughters, Kathy Bonds (Lance) and Joan Hamilton (John) grandchildren Jennifer Morrison, Jynell Kelley, Nicole Hamilton, Robby Hamilton, four great-grandchildren, sisters Bugsie Petros and Emyle Rabe and numerous nieces and nephews. Hank was predeceased by his loving wife Helen Olmstead, daughter Lori Lea Olmstead, brothers Smokey Olmstead, Swede Olmstead and sister Nickie Willson. Visitation will be at Teadway & Wigger Funeral Chapel, on Tuesday May 30th from 4:00 pm until 7:00 pm. A memorial service will be held at Yountville Community Church on Wednesday, May 31st at 11:30 am with a reception to follow. Donations may be made to Collabria Care, 414 South Jefferson St, Napa, CA

Frank "Hank" Olmstead, passed away May 23, 2017 at the age of 92, just 6 months after losing his wife of almost 70 years, Helen. He was born on July 19, 1924 to Clarence and Louisa Olmstead in Modesto California. Hank's family moved to El Dorado,... View Obituary & Service Information

The family of Frank Perry Olmstead created this Life Tributes page to make it easy to share your memories.

Send flowers to the Olmstead family.