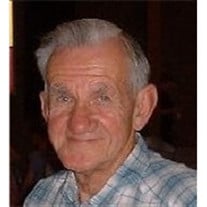 Gerald "Jerry" William Lundeen, age 85, passed away at his home in Napa, with family by his side on Friday, December 16, 2016 after a courageous battle with cancer. He was born on September 1, 1931 in Chico, California to Ernest and Grace Lundeen and moved to Vallejo in 1938 and then to Napa in 1967. Jerry Graduated from Vallejo High School in 1949. He earned an Associate of Arts degree from Vallejo Junior College in 1957. He entered into Federal service at Mare Island in 1950 as an apprentice blacksmith. After joining the U.S. Coast Guard in 1951 and serving during the Korean War, he returned to Mare Island in 1954. He worked for the Federal Service for 38 years, retiring in 1988, in the position of a ship scheduler repairing our naval fleet. Jerry was a loving and caring husband and father and a true gentlemen. His zest for life led him to be involved in square dancing, NARF (National Active and Retired Federal Employees Association), Bowling, Napa Senior Center, Sons In Retirement, Napa Model Railroad, Rio Vista Train Museum, the Grange Hall and many other volunteer positions. He loved to travel to see family and friends, and chase as many new and old trains as possible. Jerry, with his calm and reassuring manner, was always ready to offer a helping and creative hand to those in need. He is preceded in death by his parents Earnest and Grace Lundeen and his second wife Mary Lou Lundeen. He is survived by his Sister Eleanor Greig, Brother Laurence Lundeen (Rae), his first wife Virginia Cole, Daughter Sandra Wolfer (Dennis), Daughter Debbie Campbell, Daughter Barbara Turner, Daughter Paula Husted, Daughter Wanda Freedman (Ed), Son Jeffery Lundeen (Lynette); Grandchildren Danny Wolfer, Christie Grundy, Chelsea Campbell, Kyle Campbell, Brian Turner, Leah Freedman, Benjamin Turner, Amber Freedman, Ethan Freedman, Griffin Lundeen and Zachary Lundeen; Great Grandchildren Alexis Wolfer, Jaiden Grundy, River Grundy, Taylor Wolfer, Beau Turner and Ellie Turner. A memorial will be held on December 30, 2016 at 11:00 at Treadway & Wigger Funeral Chapel in Napa. In lieu of flowers, donations can be made to Western Railroad Museum or Napa Model Railroad Historical Society. Funeral Home: Treadway & Wigger Funeral Chapel 2383 Napa-Vallejo Highway Napa, CA US 94558

Gerald "Jerry" William Lundeen, age 85, passed away at his home in Napa, with family by his side on Friday, December 16, 2016 after a courageous battle with cancer. He was born on September 1, 1931 in Chico, California to Ernest and Grace Lundeen... View Obituary & Service Information

The family of Gerald "Jerry" William Lundeen created this Life Tributes page to make it easy to share your memories.

Gerald &quot;Jerry&quot; William Lundeen, age 85, passed away at his home...

Send flowers to the Lundeen family.