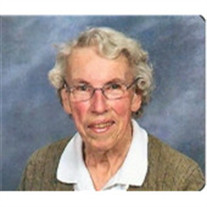 Our beloved Grace passed away peacefully on Friday, February 22, 2013 at the age of 85. Grace was born to Frank and Florence Trathen in Oakland, Calif. and moved to Napa in 1933 when her father purchased a 50 acre ranch on Linda Vista Ave. where they raised cows, chickens, pigs, ducks, geese, rabbits, and turkeys. Grace loved living on the family ranch and taking care of the animals. This love led her to join 4-H at age 10, an organization for which she would devote much of her life to. In the mid-sixties Grace met John F. Methven, Sr. They were married on August 18, 1968 and had 26 wonderful years together. Grace attended Salvador Elementary School, Napa High School, graduating in 1945, Napa Junior College for which she later was a Lifetime Alumni Member of the Napa Valley College Foundation and then went on to graduate from San Francisco State University with her teaching degree. After receiving her teaching credential, Grace's first teaching job was at the Intermediate School in Napa. She then moved to Shearer Elementary School where she taught for 37 years. She retired from the Napa Valley Unified School District after 41 years of dedicated service teaching Napa children. Grace taught around 1000 children over the years and would often run into them around town and they would tell her "I had you in 5th grade", or, "My sister had you as a teacher." She loved hearing about how they were doing and they often would tell her what a positive influence she was on their lives. After retirement Grace continued at Shearer as the school librarian and on May 1, 2003 the new library at Shearer Elementary School was named in her honor. Then, Mayor Ed Henderson proclaimed it "Grace Methven Day" by the City of Napa. Grace also received the J.C. Penney Golden Rule Award in 1997 for her volunteer service. Grace did not like to be the center of attention but loved to give. She devoted her life to the service of her community and especially to the children of that community. Grace was an adult leader for the Napa County 4-H program. Grace began her 4-H career as a youth member in 1937 and was a 4-H "All-Star" in 1944. She then continued in 4-H as an adult 4-H leader in 1947 and the 2012/2013 4-H year marked her 65th continuous year as an adult 4-H leader. Most people recognized Grace as the "Camp Registrar" for the Las Posadas 4-H camp that she herself attended as a child and continued to work on and support until the end of her life. Grace was also a fixture at the Napa Town and Country Fair. She was in charge of the 4-H exhibit hall and worked tirelessly arranging exhibits and presenting awards. In October, 2007, during National 4-H Week, the Napa County Board of Supervisors honored Grace with "Grace Methven Day" for her then 60 years as a 4-H leader and her dedication to the 4-H program and the 4-H children who she helped to mentor. Most recently at the 2012 Napa Town and Country Fair, the children of 4-H honored Grace for her dedication with a bench that now sits in the 4-H Exhibit Hall at the fairgrounds. Grace was also a long-standing member of the First United Methodist Church of Napa where she was a Sunday school teacher, the "Choir Mom" to the John Street Singers and with her mother would host a yearly Silver Service Tea Party for the ladies of the church. When Grace's mother, father, husband, and other family members needed to be cared for, Grace was there for them dedicating herself to their comfort and healthcare. When Grace had a free moment she could be found relaxing in her yard gardening or enjoying the outdoors. Grace is survived by her brother Albert Trathen, her devoted stepson John F. Methven, Jr. who provided love and support through her recent illness, stepdaughter Linda Methven, Chad Methven (grandson), Amy Klenk (granddaughter), Lachland and Jayda Klenk (great-grandchildren), David, Larry, and Richard Trathen (nephews), other family members, as well as numerous friends who loved her. The family requests that donations be made in her name to the Napa County 4-H Camp Program, 1710 Soscol Ave., Suite 4, Napa CA 94559 so that children may continue to attend the camp that Grace loved or to the Parkinson Research Foundation. Friends are invited to attend a memorial service for Grace on Friday, March 1 at 11:00 a.m. at the First United Methodist Church, 625 Randolph St. Please sign the guestbook at www.treadwaywigger.com.

Our beloved Grace passed away peacefully on Friday, February 22, 2013 at the age of 85. Grace was born to Frank and Florence Trathen in Oakland, Calif. and moved to Napa in 1933 when her father purchased a 50 acre ranch on Linda Vista Ave.... View Obituary & Service Information

The family of Grace Trathen Methven created this Life Tributes page to make it easy to share your memories.

Our beloved Grace passed away peacefully on Friday, February...

Send flowers to the Methven family.