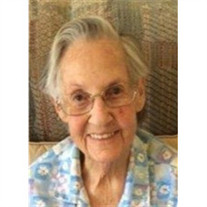 Harriet Louise Green passed away on March 30, 2019. She was 93 years old, soon to be 94. She was born in Carthage, MO. on April 24, 1925. She attended schools in Carthage. She was married in 1942 to Carl Green of Columbus, Kansas. Louise and Carl moved to CA in 1949. They moved to Vallejo, CA (now American Canyon) in 1954. They were married for 64 years until his passing in 2006. Louise was a homemaker. She enjoyed spending time with her family. Louise enjoyed reading books and liked inspirational magazines. Her other interests were working crossword puzzles and jigsaw puzzles. Louise was a baseball fan of the San Francisco Giants and a football fan of the San Francisco 49ers. Her favorite shows to watch were Dancing with the Stars and game shows. Louise had a large collection of elephant figurines that were very special to her. She was preceded in death by her parents, three sisters, and son-in-law, Frank Hearn. She is survived by daughter, Carla Hearn of Pampa, TX, son, Ron Green of Napa, CA, daughter, Marsha Green of Napa, CA, daughter, Donna Willis of Napa, CA, son-in-law, Mike Willis of Napa, CA, grandson, Ken Hearn and wife Nikki of Lubbock, TX, grandson, Scott Hearn and wife Tanya of Sour Lake, TX, grandson, Andy Willis of Napa, CA, great grandson, Geoff Hearn of Sour Lake, TX, and great granddaughter, Kym Hearn of Sour Lake, TX. Funeral Home: Treadway & Wigger Funeral Chapel 2383 Napa-Vallejo Highway Napa, CA US 94558

The family of Harriet Louise Green created this Life Tributes page to make it easy to share your memories.

Send flowers to the Green family.