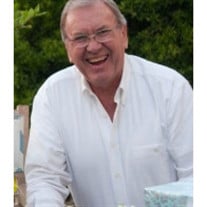 Russell Burr passed away on Friday, March 1st, 2019 at his home in Napa, CA. He was born on September 1, 1945 in Denver, CO to Betty Mae Burr. His father, Harrison Russell Burr II, had been killed in action in World War II prior to Russells birth. His first 3 years of life were in Denver with his mother, aunt and grandmother. Betty and Russell moved to Angwin, CA in 1948 for Betty to attend Pacific Union College. While at PUC, Betty met Richard Rehngren and they married in 1949. Richard became the father whom Russell would love and know as Dad. When Russ was 12, his sister Christina was born, making him a proud big brother. Russ completed his elementary, high school and college education in Angwin. He graduated from Pacific Union College in 1967 with a Business Administration degree. His first job was working for Shell Oil in San Francisco. Discovering that a desk job was not how he wanted to spend his life, Russ followed in the footsteps of his paternal grandfather, Harry Burr, and ventured into construction. For a time, he enjoyed teaching construction to students at PUC under the direction of his mentor and good friend, Burton Pontynen. Over the years, Russ built a reputation as a fine craftsman with his natural ability to envision, create and restore beautiful homes and wineries. Many of his construction projects were featured in Architectural publicationsi.e. Fine Home Builder, Fine Home Remodeler and Architectural Digest. He spent the last years of his career working for Peju Winery, building the beautiful tower and tasting room, and serving as the facilities manager. While in college, Russ met his first wife, Francene; the couple married in 1968. They had two sons, Jason Russell and Alexander Harrison, and made their home in St. Helena. In 1997 longtime friends, Shirley and Harold Morrison, introduced Russ to Gail who became the love of his life. Russ and Gail were married in August, 2004 at Peju Winery in the tower that he built. They enjoyed a life together filled with friends and family, camping, hiking, skiing, travel and motorcycle trips with the Napa Valley Touring Society. He remained an engaged and devoted father to his sons, and valued the connections he had with his sister, Christina and her family in southern California, and his family in Denver. In early 2013, Russell suffered a major stroke which was a shock to all. While recovery and rehab required great effort, Russells eternal optimism and support from family and friends helped him reach a place where he could once again participate more fully in life. Russ sustained a traumatic brain injury from a bad fall in the spring of 2017. Recovery was much more challenging this time; his valiant efforts are now over and he is at rest. Russell is survived by his wife Gail, sons Jason and Alex, sister Christina (Gary), two nieces, Kelsi (Randy) and Jacque (Tyler) and nephew Brogan, as well as beloved extended family. Gails children, Michael (Heidi) and Christy (Shaun) considered Russ a treasured part of the family, and a wonderful grandpa to Hannah, Gabriel, Olive and Ansel. Russ loved his family and friends and we loved him. His kind-hearted, loyal, creative, fun-loving and generous soul will be dearly missed and forever in our hearts. A celebration of life will be held at the Magnolia Room in St. Helena, on Friday, March 22 at 1pm. As an expression of sympathy, memorial contributions may be made to Queen of the Valley Foundation or the National Parks Foundation. Funeral Home: Treadway & Wigger Funeral Chapel 2383 Napa-Vallejo Highway Napa, CA US 94558

Russell Burr passed away on Friday, March 1st, 2019 at his home in Napa, CA. He was born on September 1, 1945 in Denver, CO to Betty Mae Burr. His father, Harrison Russell Burr II, had been killed in action in World War II prior to Russells... View Obituary & Service Information

The family of Harrison Russell "Russ" Burr created this Life Tributes page to make it easy to share your memories.

Send flowers to the Burr family.