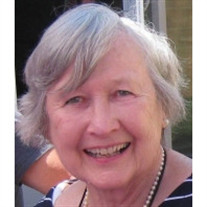 Helen Burkhard, 87, passed away Friday October 19, 2018 after a two year battle with lung cancer. A longtime Napa resident, Helen was a beloved wife, mother and grandmother. Born November 20, 1930 in Monroe, Wisconsin to Fred and Christina Buob, Helen survived a bout with polio at the age of 15. She graduated from Monroe High School in 1949. In 1953, Helen married Ken Burkhard. She worked as a stenographer until the birth of her first son Steve in 1954, followed by her second son Jim in 1956, daughter Theresa in 1959 and Mary in 1968. The family moved from Wisconsin to Napa in 1961. Helen was very active in the St. Apollinaris Catholic Church parish. Helen was also a former member of the Loyal Order of the Moose. She loved to bowl and was on several leagues. Helen was also an Avon lady and enjoyed selling to all of the ladies in the neighborhood. Helen was a fabulous baker, making dozens of cookies, bars and candy during the holiday season and for special occasion. She knew everyones favorite and would make a special batch for each family member. Over the years, Helen attended the kids and grandkids sporting events and was an avid Golden State Warriors fan. She remembered everyones birthday and anniversary and loved doing puzzles and Sudoku. She also had a recent passion for playing mahjong with her friends. Helen is preceded in death by her husband of 56 years, Ken Burkhard and her parents Fred and Christina Buob. She is survived by her sons Steve Burkhard (Paula) of Sparks, NV and Jim Burkhard (Michelle) of Lodi, her daughters Theresa Spahr of Woodland and Mary Blakley (Wayne) of Fairfield. Helens loving grandchildren are Melissa Spahr (fianc Kyle) of Baltimore, Katie Spahr of Boulder, Jillian Burkhard of Boulder, Garrett Burkhard of Lodi and Taylor Blakley of Fairfield. She is also survived by her brother and sister-in-law Fred and Patti Buob of Austin and many loving nieces and nephews across the country. Friends and family are invited to attend a Vigil Service Friday November 9th at 7 PM and Funeral Mass on Saturday November 10, 2018 at 11 AM at St. Apollinaris Catholic Church, 3700 Lassen St. Napa, CA 94558. Reception will follow the Funeral Mass at the Marriott Napa Valley 3425 Solano Ave, Napa. In lieu of flowers, memorial contributions can be made to St. Apollinaris Catholic Church. Funeral Home: Treadway & Wigger Funeral Chapel 2383 Napa-Vallejo Highway Napa, CA US 94558

The family of Helen Christina Burkhard created this Life Tributes page to make it easy to share your memories.

Send flowers to the Burkhard family.