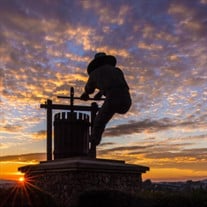 Jack Stanion Cummings, Jr. passed away in his Napa home with his loving wife, Judy, at his side on Aug. 27, 2020 following a lengthy battle with lung cancer. He was 74. He was born in Clinton, Mass. on Feb. 21, 1946 to Jack Stanion Cummings Sr. and Marjorie Whitcomb Cummings. The family moved to the Bronx, New York for a very brief time. When Jack and his younger brother Bob came home from school to tell their mother they had learned about the "boids" (birds), his mother decided that a move was necessary. They settled in Stamford, Conn., where Jack attended Springdale Elementary, Dolan Middle and Rippowam High School. After graduation, he attended the Air Force Academy, served in Vietnam for two years and was honorably discharged in 1970. Jack remained in Colorado for the next 20 years and moved back to Stamford, Conn. to help care for his father, who had terminal cancer. After his father's death, his mother bought a tourist cabin business in Charlestown, R.I., and Jack moved there along with his mother, brother, sister-in-law and two nephews. At a Rippowam High School reunion in 1989, Jack met his former classmate, Judy White, whom he had known since kindergarten. They were married a year later and were happily married for 30 years. In 1990, the Cummings moved to Napa, where Jack was the CEO of the Napa Boys and Girls Club, which always remained his favorite job. Another favorite was director of Finance and Administration with the American Institute of Wine and Food, where he worked closely with Julia Child. Jack spent 20 years in the wine industry, working at Cakebread Cellars, serving as general manager at Failla Wines and others. As a "cradle" Episcopalian, he faithfully attended Grace Episcopal Church in St. Helena with his wife, Judy, for the past 25 years. He was a lector and choir member as well as a member of the St. Helena Chamber Choir, with whom he sang at Carnegie Hall in New York. He served on the board of trustees for the Northern California Episcopal Diocese and was on Bishop Megan Traquair's Strategic Planning Team. He also served on the board of directors for Hearts & Hands Preschool, a part of St. Luke's Episcopal Church in Calistoga. He was predeceased by his father, Jack Stanion Cummings, Sr., his mother, Marjorie Whitcomb Cummings, his brother, the Rev. Robert C. Cummings and his sister, Marjorie Elizabeth Allen. He is survived by his loving wife, Judy Cummings of Napa; two nieces and two nephews. In lieu of flowers, memorial donations may be made to Collabria Care Hospice, 414 S. Jefferson St., Napa, CA 94559 or Grace Episcopal Church, 1314 Spring St., St. Helena, CA 94574. A memorial service will be held sometime in the future, when it is safe to do so.

Jack Stanion Cummings, Jr. passed away in his Napa home with his loving wife, Judy, at his side on Aug. 27, 2020 following a lengthy battle with lung cancer. He was 74. He was born in Clinton, Mass. on Feb. 21, 1946 to Jack Stanion Cummings... View Obituary & Service Information

The family of Jack Stanion Cummings created this Life Tributes page to make it easy to share your memories.

Jack Stanion Cummings, Jr. passed away in his Napa home with...

Send flowers to the Cummings family.