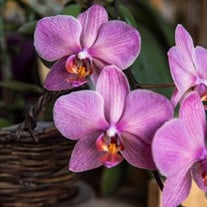 Jan Lassagne passed away Sunday, September 5, 2021, with her husband and two daughters by her side. Her passing was quiet and peaceful and was the result of an aggressive brain tumor. She is being remembered for her beautiful smile, her charm, her gracious and loving nature, the joy and positivity she showed, and her irresistible laughter. Jan was born April 11, 1932, in Oakland, Calif. to Floyd and Esther Comstock. Her father was an architect, and her mother was a teacher. She has two older siblings, Marilyn and David. In 1941, the family moved to Walnut Creek. Four years later, Jan attended Acalanes High School. She was a talented flutist and played in the Berkeley Young Peoples Symphony. She sang in the choir at Walnut Creek Methodist Church. The choir director there hired Ted Lassagne as organist, and later asked him to come to Jan's voice lessons to accompany her. They started dating shortly after that. They maintained their relationship although going to colleges 60 miles apart. Jan went to College of the Pacific, where she was elected Homecoming Queen in her first semester. Their mutual interest in music bound them together in a friendship which lasted 73 years, 68 of it as a married couple. They were married Aug 15, 1953. Their first home was in San Bruno where Jan taught second grade while Ted finished college. Ted played the organ at the Methodist church and Jan sang in the choir. Ted was commissioned in the US Air Force and sent to Houston, Texas for navigator training. They spent 20 years in the Air Force, traveling from Houston to Sacramento, to Palo Alto, to San Bernardino, to Montgomery, Alabama, to the Philippines, to State College, Penn., to Arlington, Virginia. Upon their retirement, they moved to Cupertino. They joined the Sunnyvale Congregational Church, where they sang in the choir and Ted was a substitute organist. Jan served the church as office manager for ten years. They joined the recently-organized , having met 's founders, Millard and Linda Fuller, in 1961 during their military stint. Jan was president of a board which helped establish the western region of . They volunteered on several builds as well as giving many presentations to promote . Jan served on the University of Pacific Alumni Board from 1981 to 2000, serving as president of the alumni association from 1989 through 1990. Jan helped establish the Pacific Family Camp, which they attended with their granddaughter Hannah. She also helped found the South Bay Pacific Club. In 1994 they retired from their jobs and moved to Napa. They joined Covenant Presbyterian Church where they sang in the choir and Ted was organist for several years. They were active in other aspects of church activity. They continued to give presentations for . Jan was active in several sections of AAUW. She took part in elementary school reading programs, using her teaching talents. Jan took up watercolor painting and produced several paintings for their home and those of her children. She and Ted traveled to Canada, England, France, Germany, Austria, the Czech Republic, and the Scandinavian nations. Jan is survived by her husband Ted, her children Steven Lassagne (wife Yukari), Kathryn Tiberend (husband John Bridges), and Michelle Buscho, along with a granddaughter, Hannah Tiberend, as well as her siblings David Comstock and Marilyn Hopkins. A son, Paul, died in 1963 at the age of five. Gifts in her memory may be sent to Covenant Presbyterian Church, Collabria Hospice, or .

Jan Lassagne passed away Sunday, September 5, 2021, with her husband and two daughters by her side. Her passing was quiet and peaceful and was the result of an aggressive brain tumor. She is being remembered for her beautiful smile, her charm,... View Obituary & Service Information

The family of Janice Comstock Lassagne created this Life Tributes page to make it easy to share your memories.

Send flowers to the Lassagne family.