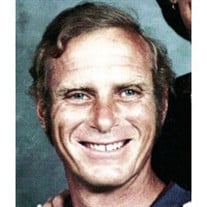 Jerold "Jerry" Lindsey passed away peacefully on the night of Sunday, Oct. 19, with his family at his side. He was 67. Jerry was born to Glen and Reva Lindsey in Los Angeles on March 16, 1947. As a child, he enjoyed hunting and long camping trips with his family in the wildernesses of California. He was a member of the Boy Scouts, and grew up in Walnut Creek, where he began developing a lifelong passion for skiing, eventually joining the National Ski Patrol in Tahoe and Colorado. He graduated from Del Vall High School, where he ran cross country and found his sweetheart, Sharyn, who he married in 1966. He then served in the Army before establishing a family in Seattle and Livermore. Jerry and his family moved in 1975 to Napa, where he worked as a general contractor and founded his own company, Lindsey Construction. He built homes and wineries and was a master wood craftsman until his retirement. Although he lived in Napa, his true home was the great outdoors of California and Mexico. Like his brother, Connie, and his parents, Jerry was a passionate outdoorsman, with an insatiable lust for fishing and camping and hiking with his family and friends. He pursued sport fishing off the Pacific Coast near Bodega Bay and in the Sea of Cortez in Baja, which he visited frequently with fishing buddies from Napa, Davis and San Diego. He often traveled to Mexico with Sharyn, hauling his boat to fish and dive for lobster near Punta Chivato and Loreto. He also enjoyed playing softball and whitewater rafting trips. Jerry was known to his friends as an outgoing and generous man who opened his heart and home to friends and people in need. He will be remembered by all for his warmth and wit. He had a deep love for his family, especially his granddaughters. He is survived by his wife, Sharyn; his son, Dwight, and daughter-in-law Kristy of Napa, as well as his son, Daryl of Berlin, Germany. He has two granddaughters, Mandy and Alyssa Lindsey of Napa. A celebration of his life will take place at the Lindsey family home on Dec. 14. In lieu of flowers, the family recommends making a donation to a hospice or cancer foundation of your choice.

Jerold "Jerry" Lindsey passed away peacefully on the night of Sunday, Oct. 19, with his family at his side. He was 67. Jerry was born to Glen and Reva Lindsey in Los Angeles on March 16, 1947. As a child, he enjoyed hunting and long camping... View Obituary & Service Information

The family of Jerold Glen Lindsey created this Life Tributes page to make it easy to share your memories.

Jerold &quot;Jerry&quot; Lindsey passed away peacefully on the night of...

Send flowers to the Lindsey family.