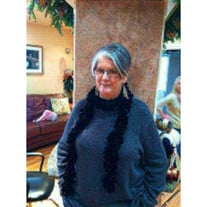 Jo Ellen Vannatta passed away peacefully after a short battle with cancer on January 22, 2013 in her home in Napa, CA. Jo Vannatta was born February 17, 1950, in Vallejo, California, the third child of Jack and Jeanne Vannatta. As a child, she spent her early years learning to live life to its fullest with her three sisters, Janice, Marge and Jill and her brother Jack. The family moved to Napa in 1955 and into a house on 691 Somerset Place. She attended Napa High where she was very active in playing the clarinet in the Napa High Marching band. In 1970, she married Alan K. Heu from Kailua, Hawaii and moved to Honolulu, Hawaii. With Alan, she had two wonderful daughters, Kelli-Jeanne Ululani and Kym Ka'ili'alakualono Heu. Unfortunately, the marriage didn't last, however she moved on and later married Ernest Bonga of Honolulu, Hawaii. She secured a job at Hawaiian Telephone Company where she worked as a mail clerk, an operator and finally retired 26 years later as a collections agent. After retirement from the phone company, she decided to return to her roots in Napa, California. In 2009, she purchased her first house at 2942 Kilburn Avenue where she enjoyed home improvement projects like the beautiful backyard where she spent much of her time with her two beloved cats TK and Lucy. Jo will be terribly missed by her best friend and daughter Kelli-Jeanne U. Heu and her husband Hugh Kirkpatrick, her sisters Janice Mitchell of Napa, California, Margaret Howard of Burnt Hills, New York and Jill Brown of Sparks, Nevada, her brother Jack Vannatta of Napa, California and her 3 nieces and 4 nephews. She will also be sorely missed by her two cats, TK and Lucy. She was predeceased by her parents Jeanne and Jack Vannatta as well as her youngest daughter Kym Ka'ili'alakualono Heu. In lieu of flowers, contributions can be made to the Hawaiian Humane Society (where she got her beloved two kitties, TK and Lucy). More information as to how to contribute can be found at: http://www.hawaiianhumane.org/Donate-Now.html The family will be having a private ceremony; however they will be celebrating her life on Friday, February 22, 2013 with a night of reminiscing and karaoke (one of her favorite things to do) at the Trancas Steakhouse in Napa, California on or around 8pm and also at Art's Hideaway in Honolulu, Hawaii on March 1, 2013 at approximately 6pm. Jo's ashes will be laid to rest next her daughter, Kym as it was her wishes, in Makiki Cemetery at 1630 Pensacola Street in Honolulu, Hawaii. You may sign the guestbook at www.treadwaywigger.com.

Jo Ellen Vannatta passed away peacefully after a short battle with cancer on January 22, 2013 in her home in Napa, CA. Jo Vannatta was born February 17, 1950, in Vallejo, California, the third child of Jack and Jeanne Vannatta. As a child, she... View Obituary & Service Information

The family of Jo Ellen Vanatta created this Life Tributes page to make it easy to share your memories.

Jo Ellen Vannatta passed away peacefully after a short battle...

Send flowers to the Vanatta family.