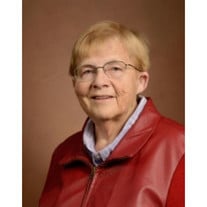 JoAnn Busenbark, who lived a life of public service, died Monday at Queen of the Valley Medical Center after a battle with cardiovascular disease, her friends reported. She was 81. She was a strong advocate for seniors, those with disabilities, veterans and those who are poor. Busenbarks remarkable career included more than 30 years developing and administering programs and services for disabled students at Napa Valley College, nine years on the city of Napas Planning Commission, two terms as a Napa council member, and more recent advocacy for senior citizens. She had served on the Napa-Solano Agency on Aging, the Napa County Para-transit Coordinating Council, the city of Napas Senior Center Advocacy Commission and the Napa County Commission on Aging. "She was a champion for those of us who are underrepresented or perhaps forgotten," said Heather Stanton, a friend and fellow Commission on Aging member. Dr. Ronald Kraft, superintendent/president of Napa Valley College, announced Busenbarks death in a letter sent Tuesday to the college community. "She was gentle and tough, kind and generous, and passionate with a capital P. JoAnn had a positive impact on Napa from the day she arrived here in 1967 until the very end, fighting for all issues related to the disabled population of the Napa Valley, as well as the elderly and the poor." She served from 2004 to 2016 on the colleges Board of Trustees. After she chose not to run for re-election, she was granted Trustee Emerita status. Busenbark was known for her bluntness, Stanton said. "Throughout her life, she said what she thought she needed to say, with no filters." "She never thought she was in a popularity contest. She reminded me of the Frank Sinatra song, I do it my way," Stanton said. Former Napa Mayor Ed Henderson remembers Busenbark as someone who took "strong positions" and "stood up to Harry Martin," who published the Napa Sentinel newspaper. "Martin backed off. He had respect for her," Henderson said. Napa Mayor Jill Techel called Busenbark a "mentor and role model." Busenbark was on the council in 1996 that appointed her to fill a vacancy, she recalled. "She would make a motion I think just to get the conversation started, but never was positional about her motion and was willing to accept changes," Techel said. During her time on the council, she advocated for economic development, defending the citys general plan and Rural Limit Line and encouraged the construction of workforce housing. Busenbark served two terms on the City Council before her defeat in the March 2003 election. "I admired that she stayed so active in the community and shared her experience on the College Board. If she saw a need she jumped in to help find solutions and her latest work on senior issues was a great example of this," Techel said. Stanton said Busenbark was raised on a farm in Roseburg, Oregon with sisters. "Her father decided she was the boy. She grew up driving a tractor," she said. She attended Oregon State University, where she played field hockey, and earned a bachelor of science degree. She first taught physical education and health at K-12 schools in Oregon, then was a teacher, coach and dean of girls for a school district in upstate New York. Afterward, she moved to Salem, Ore. and taught at Hillcrest School for Girls, a court school for juvenile delinquents, before moving to Napa. Busenbark raised four "god-children": Falina, Peter, Daniel and Nathan, said Sandy Fagan, a friend. She was cremated and her ashes were sent to Oregon, Stanton said. Her friends will be planning a memorial event. Funeral Home: Treadway & Wigger Funeral Chapel 2383 Napa-Vallejo Highway Napa, CA US 94558

JoAnn Busenbark, who lived a life of public service, died Monday at Queen of the Valley Medical Center after a battle with cardiovascular disease, her friends reported. She was 81. She was a strong advocate for seniors, those with disabilities,... View Obituary & Service Information

The family of JoAnn Busenbark created this Life Tributes page to make it easy to share your memories.

Send flowers to the Busenbark family.