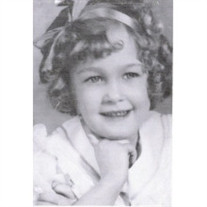 Joan Florence Wiser Moen, a resident of Napa for over 55 years Joan was born to Frank & Margaret Wiser on August 9, 1930, when her father delivered her in their apartment at 150 Prospect Park, Brooklyn, New York. She was the youngest child with brother, John Thomas and sister, Helen Elizabeth. Joan had many fond memories of her wonderful days in New York with its parks, libraries, museums, wonderful activities, shopping, parades and snow. As a child, Joan, who looked like another little "Shirley Temple", was a child performer, dancing ballet and tap on one of Broadway's stages, performing acrobatics and in parades. Joan was a John Powers' child model and was featured in a Brooklyn Times Union newspaper as being one of Brooklyn's "Most Charming Child". Joan was especially proud that she had performed and ice-skated with "Belita", a British Olympic figure skater, classical Russian ballet dancer and Hollywood film actress who appeared in films with Clark Gable and Charles Laughton. Approximately 1943-44, Joan and her family relocated to Vallejo, California. Her brother and father were involved in wartime duties, her mother and sister worked at Mare-Island and Joan attended Franklin Junior High and Vallejo High Schools in Vallejo. Joan worked for Meyers Jewelry Store in Vallejo. She then moved to southern California and worked at Hughes Aircraft (several months prior to marriage & becoming a life long homemaker), as a taper which she was commended for being so detailed in her work. Joan was briefly married twice before finding her lasting love, Clifford Moen, and they celebrated 47 years of marriage prior to his passing in 2004. Joan with husband Clifford and daughter Peggy were all active in many Napa political activities, with some highlights such as attending Governor Ronald Regan's Inaugural Ball, receiving invitations to President Nixon's Inaugural and Joan being pictured in the Napa Register with Governor George Wallace. In 1969 they purchased their first duplex, which over the years grew into several more duplexes and their family rental business which still provides "home" to some tenants which have been with them for over 30 years. In 1970 they purchased a cabin at Lake Tahoe which proved to be a wonderful week-end and vacation place for family and friends for over 30 years. In 1987, they purchased a condo in Palm Springs, CA to become "snowbirds" living in the warm climate from November to May helping to relieve Clifford's arthritis. This provided many wonderful family memories and holidays together, especially the yearly photos of grandchildren, Joanie and Cliff Larghi with Mayor Sonny Bono at the town's Christmas tree lightings! Another fond family special memory is that Joan's mother, Margaret, was from England and so all generations have been brought up to daily drink our tea with cream and sugar (English style) and knowing that if things aren't going just right, not feeling well or just need a pick me up...a cream puff or chocolate clair makes everything better! They were members of Our Savior's Lutheran Church in Palm Springs, CA for over 20 years loving this church's fabulous musical productions! In Napa, they were charter members of Emmanuel Lutheran Church for 46 years prior it's merger with Redeemer Lutheran Church which became Napa Valley Lutheran Church. Joan was especially proud that her grandson Cliff and wife Shelley were one of the last weddings at Emmanuel and her granddaughter, Joan's daughter Emmalee, was the last baptized member of Emmanuel prior to the merger. Sadly for Joan's family, Joan developed aggressive Alzheimer's disease and has spent her final years at The Berkshire, where she has had exceptional care in a family atmosphere. Joan's Family is especially thankful to The Berkshire staff. Joan is survived by her only child, her daughter, Peggy Ann Larghi; son-in-law, Jerry Larghi; granddaughter, Joan Marie Larghi; grandson, Clifford Lee Larghi (wife Shelley); great-granddaughter, Emmalee Ann; sisters-in-law: Ovila Nelson, Doris Rosenberg, Leila Stoll, Mary Ann Loew, Nelda Moen and Nancy Moen; many nieces, nephews and cousins. She was preceded by her husband Clifford Moen, mother and father Frank and Margaret Wiser; brother, John Wiser and sister, Helen Hannaford. Friends may call between 3 and 8 p.m. on Monday, March 11 at Treadway & Wigger Funeral Chapel, 623 Coombs St., Napa. Burial will be private. Please sign the guestbook at www.treadwaywigger.com

Joan Florence Wiser Moen, a resident of Napa for over 55 years Joan was born to Frank & Margaret Wiser on August 9, 1930, when her father delivered her in their apartment at 150 Prospect Park, Brooklyn, New York. She was the youngest child with... View Obituary & Service Information

The family of Joan Florence Wiser Moen created this Life Tributes page to make it easy to share your memories.

Joan Florence Wiser Moen, a resident of Napa for over 55 years...

Send flowers to the Moen family.