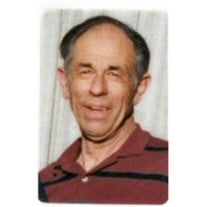 John Joseph Michael Scheerer, 80, a native of Napa, died unexpectedly due to heart failure Dec. 23, 2013 at his home. John was born March 20, 1933 at Napa's Parks Victory Hospital the only child of the late Alvin Joseph and Mae Pauline Fernando Scheerer. He attended St. John's School as a boy and was a 1952 graduate of Napa High School. John served honorably in the U.S. Army in Korea from 1953-1955. Upon his return, John attended Napa Junior College and worked for a time for PG& E and later Gasser Motors. He spent the majority of his career at the Mare Island Naval Shipyard as a pipefitter mechanic on submarines and lastly as forklift operator. He retired in 1995 after 36 years of service during which he received numerous achievement awards. John was a fixture to the Napa bowling community. He played on numerous bowling teams and amateur league. In 1995 John married Carolyn Brainerd. John loved taking pictures and enjoyed going to car shows, the Reno Air Races, the power boat races in Benicia, and Fleet Week in San Francisco. John followed local sports and enjoyed attending local high school and college games. He seldom missed a game and was their biggest fan. John was also a member of SIRS Branch 105 in Napa and had been a proud member of the Sons of the Golden West for 48 years. John is survived by his wife Carolyn S. Scheerer; Carolyn's children: Terry Anderson, her husband Robert and their daughter Corey, Cathy Erdmann and her children Curtis and Amber, and Bruce Brainerd; John's three children: Dennis Scheerer and his children Krystal and Kyle, Donna Scheerer-Treleven and her husband Ted, and Denise Bogovich and her son Hudson. He is also survived by his former wife Pat Hampel. He was preceded in death by Carolyn's son Steve Brainerd in 1994. Funeral service will be 1:00 p.m. Monday, Dec. 30, at Treadway & Wigger Funeral Chapel, 623 Coombs St. in Napa. Friends may pay their respects from 10:00 a.m. 4:00 p.m. Saturday and from 10:00a.m. Noon Monday at the funeral home. Private committal will be at a later date at the Sacramento Valley National Cemetery in Dixon. The family asks that memorials be made to the Veterans of Foreign Wars, The Humane Society, or the charity of the donor's choice.

John Joseph Michael Scheerer, 80, a native of Napa, died unexpectedly due to heart failure Dec. 23, 2013 at his home. John was born March 20, 1933 at Napa's Parks Victory Hospital the only child of the late Alvin Joseph and Mae Pauline Fernando... View Obituary & Service Information

The family of John Joseph Michael Scheerer created this Life Tributes page to make it easy to share your memories.

Send flowers to the Scheerer family.