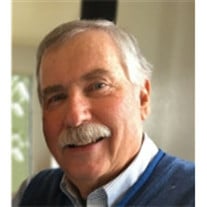 John Stewart 1949 - 2018 John Wilbur Stewart died in Napa on May 31, 2018 at the young age of 68. John, son of Wilbur and Bertha Stewart, was one in a long line of strong Stewart men with big hearts. Born on Christmas Day in 1949, he was raised in the Carneros area of Napa with his four sisters, learning how to farm and fix nearly everything he touched. Being the son of farming parents was formative to his character. He lived out his days with a sense of obligation to make the best decisions for his family and community. Always a planner - in service, professionally, and personally - he frequently counseled those close to him to make decisions with their grandchildren in mind. He graduated from Napa High School and attended UC Davis receiving a degree in civil engineering. His best friend, Ted Wigger, luckily reconnected him to a fellow Napa High alum, Carolyn, the love of his life. They lived happily in Napa raising their three daughters and enjoying many adventures together. They shared a marriage, a friendship, and a sometimes unusual sense of humor that kept them strong and provided their children with a clear vision of what "true love" was. Starting his career as a civil engineer with Napa County, John moved to the Napa Public Works Department where he spent several years as an Assistant Engineer, Associate Engineer, and Water Manager for the City of Napa. He left the Public Works Department to lead the Napa Sanitation District as the Engineer Manager. John returned to Napa County as a Principal Engineer, and also spent time with Calaveras County as the General Manager of several water and wastewater plants, and RSA. John dedicated his life to serving and caring for his family, friends, and community. He was a lifetime member of the Kiwanis Club of Napa and served on various committees at First Presbyterian Church over the years. Following Johns retirement, he went on to enjoy local hobby groups: a welding group and a general mens group, both of which involved eating pies and telling stories more than anything else. John was also a volunteer and leader with Los Carneros Water District, spearheading the multi million dollar project to bring reclaimed water across the river to the Carneros region of Napa. In his later years, John found a passion for mentoring and connecting people. He went out of his way in retirement to be a mentor for several young Napa engineers and public servants. He would describe this passion by saying how much he enjoyed "setting other people up for success." With a heart for service, Johns passing leaves a huge void in the Napa community, among his friends, and in his family. John found much joy caring for his friends and family. He could often be found taking a meal to an ill friend, making house calls to home bound friends and family, and fixing anything and everything for everyone. Above all else, his family was most important. He was available night or day, any time his children called for him. He was always a ready lap for his kids, and later his grandkids, and was always ready with a tickle or a "pester", as well. He was present and dependable, Stewart traits that his family will miss incredibly. John is survived by his wife, Carolyn, his children, Jennifer Stewart, Anne (Jesse) Kolb, and Betsy (Jason) Longoria, and his five amazing grandchildren, Julianna and Ben Kolb, Madeline and Genevieve Longoria, and John "Jack" Stewart. He is also survived by his sisters, Betty (Bob) Ball, Donna (Al) Coloman, and JoAnna Watson, his brother-in-law, Roy Griffin, and his very large extended family filled with love. He is pre-deceased by his sister, Myrle Griffin and his brother-in-law, Jack Watson. In lieu of flowers, the family encourages you to join them in honoring his commitment to our next generation by providing a donation toward scholarships in his name at the Napa Engineering Society, P.O. Box 264, Napa, CA. 94559-0264 or the Kiwanis Club of Napa, PO Box 10816, Napa CA 94581. A memorial service will be held 1:30 p.m. Tuesday, June 12th at the First Presbyterian Church, 1333 3rd Street in Napa, with a reception immediately following. Private committal will be in Tulocay Cemetery. Treadway & Wigger Funeral Chapel is serving the family.

The family of John Wilbur Stewart created this Life Tributes page to make it easy to share your memories.

Send flowers to the Stewart family.