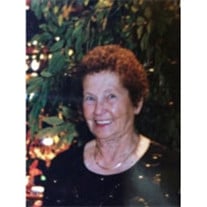 LaVonne Bandy McArthur, a native of Sacramento, CA, passed away May 9, 2017 at the age of 87. She was a resident of Napa for 67 years. LaVonne was born on December 18, 1929 in Sacramento. She loved growing up on her Grandma and Grandpa Fisher's Dairy where she learned to care for and love animals, gardening, and canning. She was a young girl during the Great Depression which gave her her iron-will and strong work ethic. Among her interests and passions were, camping at Pipi Valley on the Consumes River, water skiing on Lake Shasta and Clear Lake, snow skiing at Tahoe, visiting state and national parks with her family, genealogy, cattle ranching in Taylorsville, horseback riding, wine making, and going on jeep expeditions on the backroads of California. She loved going on cruises with her friends in the Napa Travel Club. She was a bus driver for Napa Valley Unified School District, den mother for Cub Scouts, PTA president, 4-H Leader, baseball mom, and swim club grandma. She was devoted to her family and inspired them to get a good education and fostered a strong work ethic by modeling for them. All three of her children finished college; the oldest daughter became a middle school teacher, her son became a Sea captain after graduating from the California Maritime Academy, and her youngest daughter became a teacher, principal, psychologist and earned her doctorate in psychology. LaVonne is preceded in death by her husband, Walter Edward McArthur, Jr., her sisters, Mardelle Anderson of Sacramento, and Karen Bair of Portland, OR, and "Doc" Bair. LaVonne is survived by her children; Tary McArthur Weller of Ferndale, CA, Dale McArthur of Clinton, MT, Dr. Billie McArthur of Murphy's, CA , her grandchildren: Rhett Burris of Tacoma WA, Amy Burris of Grass Valley, CA, Stephen Weller of Sacramento, CA, Rachel Weller Barker of Murrieta, CA, and Karmen McArthur of Calistoga, CA and five great-grand children; Blue, Monroe, Hayden, Brandon, Wade, and Micah.Family, friends, and neighbors are invited to a Celebration of Life which will be held on Saturday, May 20, 2017 at LaVonne's residence from 1:00 to 5:00 p.m. Memorial contributions may be made to a charity of your choice.

LaVonne Bandy McArthur, a native of Sacramento, CA, passed away May 9, 2017 at the age of 87. She was a resident of Napa for 67 years. LaVonne was born on December 18, 1929 in Sacramento. She loved growing up on her Grandma and Grandpa Fisher's... View Obituary & Service Information

The family of LaVonne Bandy McArthur created this Life Tributes page to make it easy to share your memories.

LaVonne Bandy McArthur, a native of Sacramento, CA, passed away...

Send flowers to the McArthur family.