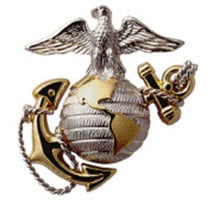 Leo Lopez was born July 17, 1920 in Silver City, New Mexico. His family relocated to Los Angeles, California when Leo was about five years old. During the Great Depression in the 1930s, Leo went to work and attended high school at the Civilian Conservation Corps (CCC) in Northern California and was stationed at various forests between Klamath and the Seiad Valley working on public works projects and forestry. Leo joined the U.S. Marine Corps in February 1942. He was in the 4th Marine Division during World War II and was in combat on Kwajalein Atoll, the Marshall Islands, Saipan, Tinian, Mariana Islands, Volcano Islands and Iwo Jima. Leo returned to Los Angeles and married Aurora Ilizaliturri on August 31, 1946. Leo worked in sales and eventually changed his work to social services in the early 1970s. He was employed with the Oregon State Welfare Department as a case worker with over 200 clients. The family later relocated to Santa Barbara, California where he worked for the Community Action Commission and began the Senior Nutrition Program where a daily meal was provided to senior citizens at various sites. His last job in social services was working with the Tri-County Area Agency on Aging serving Santa Barbara, Ventura and San Luis Obispo Counties as Community Consultant.n 1987, Leo and his wife, moved to Sonoma County. His wife, Aurora preceded him in death in November 1993. In October 1999, Leo went to live independently at the Yountville Veterans Home in the Napa Valley and later, due to frailty, lived in skilled nursing. Leo is survived by a son, Gerald Lopez, daughter-in-law, Laura, grandchildren, Jennifer and Christopher, great grandchildren, Angelina, Zander and Zoey, and daughter, Judy Lopez. Semper Fi Dad! Memorial Service will be held Thursday, May 9, 2019 at 10am at the Monthly memorial service at the Veterans home of California Yountville Chapel, Yountville, CA. Arrangements are under the direction of Treadway and Wigger Funeral Chapel. Funeral Home: Treadway & Wigger Funeral Chapel 2383 Napa-Vallejo Highway Napa, CA US 94558

Leo Lopez was born July 17, 1920 in Silver City, New Mexico. His family relocated to Los Angeles, California when Leo was about five years old. During the Great Depression in the 1930s, Leo went to work and attended high school at the Civilian... View Obituary & Service Information

The family of Leo Lopez created this Life Tributes page to make it easy to share your memories.

Send flowers to the Lopez family.