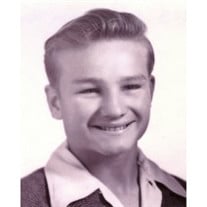 Leon passed into God's hands at his home in Napa on May 26, 2013 at the age of 84. He was born December 13, 1928 in County Line, OK to George W. and Myrtle Mae Rachel. His family lived there until July, 1942 when they moved to Napa, CA where they took up residence. Leon's first good job in Napa was delivering poultry and eggs all over the Bay Area for Jonafred Poultry and Egg Farm in Napa. Leon graduated from Napa Union High School in 1947. He married Dorothy Louise Groomer on Nov. 25, 1948 at the First Presbyterian Church of Napa where he was a member in good standing for 65 years until his recent death. In May of 1950 Leon joined the local unit of the California National Guard where he served for 33 years until he retired in 1983. In 1951 Leon was initiated into the local Yount Lodge No. 12 F. & A.M. Chapter. In 1951 Leon was hired by PG&E and worked as a lineman until 1970 when he transferred into the PG&E engineering department where he worked as an Engineering Estimator in the electric department until he retired in 1986 after 35 years of service. Leon had two brothers, older brother Jay W. Rachel (deceased) and younger brother George D. Rachel (deceased). Leon is survived by his older sister Bette Jo O'Bannon of Washington, three sons, Richard of Napa, Gregory (Pam) of Redding, CA, and Jeffrey (Mickey) of Vacaville, CA, and favorite daughter De Anna Byrtus of Fairfield. Leon had two favorite joys in his life. The first was his seven grandchildren, Greg II (Cynthia) and Eddie by his son Gregory (Pam), Jason, Joey, and Jessica by his son Jeffrey (Mickey), and Garret and Lacey by his daughter De Anna. Leon missed by two months being able to see his first great-grandchild, by his grandson Greg II (Cynthia) who is due in July. Leon's second joy was fishing in his 18' fishing boat. Leon caught many large sturgeon, fishing in the Napa River sloughs. Leon would travel to a lake just outside West Yellowstone National Park called Henry's Lake at Staley Springs Lodge, where Leon, his old Army buddy Dick Johnston and Leon's younger brother George would stay for four months every year from April to July, trout fishing in Leon's boat until they were so sick of catching big trout they would have to come home and rest for the remainder of the year until April came around the next year. Leon also liked camping and fishing at Doran Park on Bodega Bay with his family when possible. Leon asked that there not be any kind of funeral or memorial service planned. He will be cremated and his ashes will be spread at a place he picked out. Leon's family would like to sincerely thank all of the wonderful people from Napa Valley Hospice, especially the nurses and nurse's aides who helped Leon. They made it possible for Leon to have his last wish which was to pass away peacefully in his own house with his children close by. Please share memories with the family at treadwaywigger.com.

The family of Leon Rachel created this Life Tributes page to make it easy to share your memories.

Send flowers to the Rachel family.