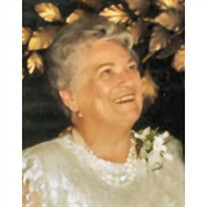 Marjorie Jeanne Johnson, 90, of Napa, passed away peacefully September 28, 2013 at a local care home following a lengthy illness. Marjorie was born Oct. 31, 1922 at the Parks Victory Hospital in Napa, the daughter of the late William Henry and Dorothy Fern Greive Hooper. She grew up in Dixon where she graduated high school and afterward attended the College of the Pacific in Stockton. With the outbreak of World War II, Marjorie began work in Vallejo at the Mare Island Ammunition Depot, and in 1944 left for Nevada to take flying instruction. She had hoped to enlist as part of the Women's Ferrying Service and help transport newly manufactured planes across country, but the program was ended just 30 days before she could have joined. She returned to Vallejo and was employed as a secretary with the school system when she met Grant Johnson. The couple was married on July 29, 1945 and eventually made their home in Napa where they were active in the Church of Jesus Christ of Latter-day Saintsremembering early meetings first held in a building above a local bakery. Marjorie also owned and operated a ceramic shop from her home, and served as a secretary at the Napa State Hospital and later at the Veterans Home in Yountville. A devoted and loving wife, Marjorie was proud of Grant's service in the U.S. Marine Corps and served as First Lady of the 2nd Marine Corps Association. She also served as President of the California Descendants of the Mayflower and Daughters of the American Revolution, and was a member of the Mite Society. Marjorie was preceded in death by her parents; brother William Hooper; and Mildred Reese whom she considered a sister. She is survived by her husband of sixty-eight years Grant Jones Johnson; daughter, Marcia Lopez; son, William Johnson and his wife Madelyn; and Marjorie's sister, Roberta Stoddard. She is also survived by a number of grandchildren and great grandchildren: Marcia's children; Karrie McElroy, her husband Steve, and their daughter Jesslyn; Kristi Tanner, her husband Brian, and their children Clayton, Mason, Brooke, and Hayden; Kori Harberts; Kraig Brinkman; Spencer Lopez; and Emily Lopez, her husband Wilmer, and their children Isabella and Ivan; and William and Madelyn's children; Desiree Atkins, her husband Matt, and their daughter Sydney; and Alex Jones, and his wife Rose. Funeral service will be 11:00 a.m. Thurs., Oct. 3, 2013 at Treadway & Wigger Funeral Chapel, Napa, with committal following in Tulocay Cemetery's Garden Mausoleum. The family asks that memorials be made to the charity of the donor's choice.

Marjorie Jeanne Johnson, 90, of Napa, passed away peacefully September 28, 2013 at a local care home following a lengthy illness. Marjorie was born Oct. 31, 1922 at the Parks Victory Hospital in Napa, the daughter of the late William Henry and... View Obituary & Service Information

The family of Marjorie Jeanne Johnson created this Life Tributes page to make it easy to share your memories.

Send flowers to the Johnson family.