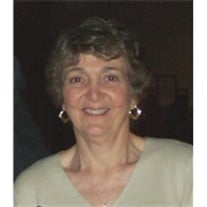 Myrna Abramowicz passed away peacefully Saturday May 11th a a local care home. Born in the Bronx, New York City on September 26, 1943, Myrna Landau Abramowicz, third daughter of Louis & Frieda Riegler Landau graduated from public schools and then worked in Manhattan for the Revlon Corporation. At the age of 21 she moved to San Francisco, where she soon met her husband, Harvey Abramowicz. After marrying, they located in Napa and Harvey became a realtor and broker. Their son Steven was born in 1971, but sadly six years later, Harvey passed away. As a single parent, Myrna dedicated herself to the care and upbringing of her beloved child. She also continued as a realtor and up to the time of her death worked in commercial real estate. At the age of 40 she enrolled at Napa Valley College and four years later graduated with a BA from UC Davis in history. Myrna's contributions to the Napa community reflected her belief in the future of our city and county. Her achievements included election to the governing board of Napa's Park and Open Spaces District, appointment by Governor Gray Davis to the Napa Expo Board, elected member for over ten years to the Napa Valley College Board of Trustees serving over half her term as president of the Board and serving on the original board and as treasurer for the Friends of the Napa River. She also worked with the local 4-H Clubs and strongly supported the Napa Community Foundation and the Napa Valley College foundation. Other local organizations too numerous to mention were among the recipients of her personal help and financial support. A lifelong Democrat, she served on the local central committee, went to the first convention that nominated Bill Clinton and later attended his inauguration. She managed several campaigns for local candidates, and as she liked to point out, had never lost an election. The last candidate she backed was Supervisor Brad Wagenknecht. An active member of the local synagogue, Myrna recently headed the committee that planned the new Jewish cemetery in St. Helena. She understood the need for suitable burial grounds for the Jewish people in this area. She was predeceased by her husband Harvey Abramowicz, her parents, her sister Irene Meyers and nephew Robert Meyers. She is survived by her son Steven and wife Kara Abramowicz; grandchildren Liam, and Kathleen, (called Frankie) all of Seattle; sister Sandra Levine of Las Vegas; niece Susan and husband Don Gautereaux and their children Danielle and Ryan of Los Angeles and niece Norma Thosinsky of Fairfield. Many were her friends and acquaintances in her business, political, charitable circles and the synagogue. She wished special mention be made of Ginny Simms, "my Mentor", George and Mary Ellen Boyet "provided humor, political guidance and research", Susan Wilkinsen "my shopping mate" Sandy Callahan "my old friend", Dolores Fischer "travel companion", neighbors Kim Kocker, Karen Ashford and dog Eddy who delivered the newspaper every morning, and Genji Schmeder for intellectual stimulation; as well as Donna Heine, Betty Lambert and Lillian Gabriel for their lifelong friendship. She wanted remembered, for their help and support, Joe Anderson of Expo, Henry Michalski of the synagogue, Bernhard Krevet, Moira Block and Francie Winnen. Her love for all those loyal friends and companions not included in this list was steadfast and enduring. As a young woman she had enjoyed tennis and swimming but later turned to long walks for exercise. She traveled extensively, including trips to Israel, Europe and Mexico. Opera, theater, movies, reading, lectures and book clubs provided entertainment and interest. Her grandchildren provided joys, "impossible to write about", she indicated shortly before her death, and she rejoiced in the love of her son Steve and his wife Kara and their happiness. Not only her family and friends but also the entire community of Napa will feel the loss of her leadership and inspiration. You are warmly invited to her funeral Tuesday at 1:00 P.M. at Treadway & Wigger Funeral Chapel. In lieu of flowers, donations may be made to the Abramowicz Family Fund at Napa Valley community Foundation

The family of Myrna Barbara Abramowicz created this Life Tributes page to make it easy to share your memories.

Myrna Abramowicz passed away peacefully Saturday May 11th a a...

Send flowers to the Abramowicz family.