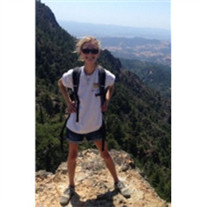 Nicole Jolene Rossi, age 22, passed away Sunday, October 8th at Adventist Health St. Helena, surrounded by her loving family. Nicole was born on June 30, 1995 at Queen of the Valley Hospital in Napa, California. She was the youngest of four girls. As the baby of the family she had many nicknames, most notably: Coey, Co, Coco, Coco Critter, and Coco-Cacho. Nicole experienced many years marked by joy and lived according to the Buddhist philosophy that time is promised to no one. She excelled as a competitive swimmer, amateur surfer, and avid hiker (our little mountain goat). Sunflowers, wind chimes, sand dollars, heart-shaped rocks, and superb coffee (especially enjoyed during fika) made Nicoles day. Although humble as the day is long, she was a talented artist, published poet, and content writer. Nicole graduated salutatorian of the Vintage High School class of 2013. From there, she studied Environmental Science at UCSD and Napa Valley College. Her studies led her to discover her passion as a naturalist and as an activist for sustainability and environmentalism. She became a skilled organic gardener and was an aspiring sustainable farmer. She honed her skills as a Green String Farm intern, where with her hands in the soil, she felt most connected. Her old soul, empathy towards all living things, and protection of the most vulnerable served her well on the farm, as she was a friend to all creatures, big and small (even spiders were caught and released safely back outdoors). Nicole spent close to half of her life fighting a battle most knew nothing about. She was first diagnosed with Lyme Disease and Babesiosis co-infection when she was in middle school. Within a few years of beginning treatment, she was also diagnosed with Mitochondrial Disease, Mast Cell Disorder, Lupus and Anorexia Nervosa. Nicole did not let her diagnoses or the prognoses they carried define her. Although she encountered many challenges as she sought treatment and recovery, Nicole never lost her spirit or her sense of humor. She was a warriorincredibly stubborn, but full of grace. Her big, beautiful eyes held deep blue depths of perspective, grit, pain, and true wisdom. Nicole expressed herself best through her poetry. Her writing conveyed to those who otherwise could not understand, the mountains she carried, but was only supposed to climb. The mountains were calling But I didnt go I was too young I didnt know I didnt know That I didnt have time Before I had to grow Out of my magic My freedom to dream The winter came early Froze over the stream And slowed down my heart Smothered my scream Now I only imagine Pretend I can be On top of the mountains I wont ever see. The winter came early Froze over the stream And slowed down my heart Smothered my scream Now I only imagine Pretend I can be On top of the mountains I wont ever see. Nicole is survived by her mother, Marla Rossi, her father, Nick Rossi, her three sisters, Janae Anderson, Krista Tate, and Michaela Rossi, her brothers-in-law, Phil Anderson and David Tate, her nephews, Erik Anderson and Dylan Tate, her aunts, Roxanne Gomes and Lani Gomes, her uncle, Brett Gomes, grandparents Art and Vicki Myers, Cousins Rachel Richards, Jared and Ryan Gomes, and her "sisters from another mister," Rebecca Dick and Cherie Babcock. Nicole is also survived by her fur babies Lila Vargen (Kaia), Peanut, Hans the Destroyer, and Naya. The Rossi family would like to send a special thank you to the Adventist Health nursing staff for their extraordinary care and compassion during Nicoles stay. They would also like to acknowledge the dedication of Dr. Brittany L. Goss, who tirelessly searched for answers and cared for Nicole as if she were her own. "Lights will guide you home, and ignite your bones, and I will try to fix you." -Coldplay, Fix You, X & Y Nicole will be celebrated at a private family gathering. In lieu of flowers, please consider supporting the March Against Monsanto #MAM or planting a tree in her memory.

Nicole Jolene Rossi, age 22, passed away Sunday, October 8th at Adventist Health St. Helena, surrounded by her loving family. Nicole was born on June 30, 1995 at Queen of the Valley Hospital in Napa, California. She was the youngest of four... View Obituary & Service Information

The family of Nicole Jolene Rossi created this Life Tributes page to make it easy to share your memories.

Send flowers to the Rossi family.