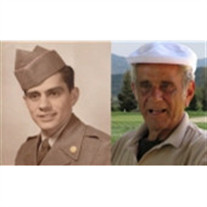 In Loving Memory of Al Meriano August 5, 1931 - April 9, 2015 Peter Albert Meriano Al was born August 5, 1931 in Shrewsbury, Massachusetts. On April 9, 2015 Al peacefully entered into our heavenly Father's Kingdom and was greeted by his parents Antonio and Caramella Meriano, his brothers Henry and Orazio, sisters Philomena, Yolanda, Ellen, and Josephine. He was a loving son, brother, father, grandfather, great-grandfather and friend. He will always be loved by his sons Robin, Jeff and Tony; daughter-in-laws Mary and Irena, grandchildren Jennifer, Kris, Kelly, Jed, Josh, Katrina and JT, great granddaughter Sienna. He is loved and will be fondly remembered by his sister Mary and many beloved nephews and nieces. Al came to California during the Korean conflict in the 1950s as part of the US Army stationed at Beale Air Force base. Beale is where he met his wife Carol as part of a dance function put on by the base. After the Army, Al remained in California and started a career in the aerospace industry where he worked on the Apollo space capsule. When the space program declined he changed careers and moved into the restaurant/beverage/hotel management field as well as working in real estate in his mountain community. As his health worsened he decided to join the veteran's community in Yountville California in order to be closer to the care he needed. As it turned out Al's nine years spent living and working at the Veterans Home in Yountville was to be some of the best years of his life. He loved golfing and playing poker with many surrogate family members at the Veterans home. He was instrumental in many activities at the home including bar-b-ques, coffee club, golf club, and Christmas decorating. "Big Al" was considered by many to be the "Heart of Section C". A memorial service will be held in the Yountville California Veteran's Home Chapel at 10:00 AM on May 14th, 2015 with graveside service following the chapel service. In lieu of flowers and to honor Al as well as those that loved and cared for him during his time of need please support the Napa Valley Hospice, 414 South Jefferson St., Napa, CA 94559.

The family of Peter Albert Meriano created this Life Tributes page to make it easy to share your memories.

Send flowers to the Meriano family.