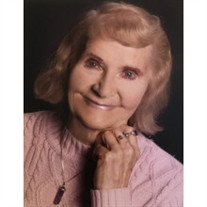 Phyllis Jean Gittings passed away at her home surrounded by family on Saturday morning, 14 September 2019, 6 weeks short of her 92nd birthday, from liver and lung cancer that was diagnosed on 8 August 2019. After her diagnose, she entered Collabria Hospice care in her Napa home. She had a fulfilling life as a loving wife, mother, grandmother, and great grandma. Phyllis was born on 27 October 1927, in Seattle, Washington to Ted and Wana Moody. She graduated from West Seattle High in 1945. She had one sister, Gayle Gardner, who was 5 years younger and passed in 2010 She then entered Washington State University in Pullman, Washington. Phyllis had a fun 2 years there and enjoyed all aspects of college life. Her weekends were filled with different dates, parties, football games, and studies. At a college street dance in March 1947, she met a young man, Cyrus Brooks Gittings, who came running after her. Cyrus had to wait a few weeks before he could see her again, as her dating calendar was so full. When asked, Phyllis said that what most attracted her to Cyrus was that he was so cute and handsome. Cyrus would never leave her alone and followed her all around campus, but she liked how persistence he was. Obviously, she let him catch up and to get to know him better, because 5 months later they were married on 29 August 1947 in Seattle. From 1947 to 1951, they lived in Seattle and Chicago. In 1952, Cyrus joined the Air Force and they were assigned at duty stations all over the world, including Norton AFB in San Bernardino, Maxwell AFB in Montgomery, Alabama, Keesler AFB in Biloxi, Mississippi, Portland, Oregon, Okinawa, Japan, and the last 11 years (1959 to 1970) of his Air Force career at Amarillo AFB, Texas. Phyllis was always a loving supportive Air Force wife and mother in all those many Air Force moves. Son Larry was born in 1952 in Seattle and daughter Pam was born in 1957 in Okinawa. Soon after he retired as a Major, they moved to their present home in Napa, California. Phyllis was preceded in death, by her husband Cyrus in 2005 and will be deeply missed by her two children, son Larry and wife Jeannette Gittings of Vacaville and daughter Pamela Gittings and her partner of 20 years, Richard Mejia of Napa. Four grandchildren, Katherine Markes, Larry Scott Gittings, Junior, Margo Teter and her husband, Shawn, last of all, Hailey Van Vorhis and her husband, Jake. She was also blessed with 5 great grandchildren, Kassandra Allen and her husband, Trace, Jayla, Rosie, Jaxon, and Wynter The things most valued in her life revolved around her family, friends, and her beloved Napa Methodist Church. She has been a member of that church since the early 1970's. In fact, she worked in the Napa Methodist Nursery for over 30 years, from the 70's to 2004. She actually babysitted kids of kids she had watched years before. Wendy, a young mom around 1998, remembers bringing in her new 2 week old baby and Phyllis held her the whole hour of church and when Wendy came back, Phyllis was still holding her. She also sang in the church choir and the senior center choir for over 30 years. She took exercise classes at the senior center for many many years. After her husband died in 2005, after 58 years of marriage, she and friends went on many cruises and trips to different countries around the world, even to the holy land in Israel, when she was almost 90. In 2009, at age 82, she climbed Diamond Head in Hawaii with her son, Larry. She had a wonderful 90th birthday celebration at the Napa Methodist Church that was attended by over 66 family and friends. Friends from the church, the senior center, and ALON attended. Soon after her 90th birthday, she fractured 2 back vertebrae and her health deteriorated after that, till her passing. Her mind was sharp till the end. She had a lifelong passion in doing crossword puzzles and even was completing those crossword puzzles day before she passed. Phyllis will be greatly missed by her family, friends, and those in the Napa Methodist congregation. The family wishes to thank Collabria Hospice and the Napa Methodist Church for their compassion and care during this time. Friends, family, and the congregation of the Napa Methodist Church are all invited to attend a celebration of life memorial at 3 PM on Sunday, 20 October 2019 at Napa's First United Methodist Church . The Pastor Marylee Sheffer will officiate. The family requests that, in lieu of flowers, contributions to the First United Methodist Church, 625 Randolph Street, Napa, CA., 94559. Condolences may be relayed online to the family at [email protected]

Phyllis Jean Gittings passed away at her home surrounded by family on Saturday morning, 14 September 2019, 6 weeks short of her 92nd birthday, from liver and lung cancer that was diagnosed on 8 August 2019. After her diagnose, she entered Collabria... View Obituary & Service Information

The family of Phyllis Jean Gittings created this Life Tributes page to make it easy to share your memories.

Phyllis Jean Gittings passed away at her home surrounded by family...

Send flowers to the Gittings family.