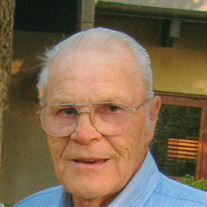 Ray Fortenberry 1940 - 2020 Alton Ray Fortenberry, 79, of Napa, formerly of Vallejo, passed away peacefully Monday, May 11, 2020 following a lengthy illness. Ray was born November 25, 1940, in Dumas, Arkansas the son of the late Elton Cecil and Aza Lee English Fortenberry. At age two he moved with his family to Vallejo, California where he attended local schools, graduated fromVallejo High School in 1958, and for a time worked in submarine construction at the Mare Island Naval Shipyard. In 1961, accompanied by his friend Pat Harper, Ray met Donna Rae Stoller and her best friend Audrey. Taken with the girls, the two young men asked for telephone numbers and two weeks later Ray called Donna for a date. On May 12, 1963, Ray and Donna were married. The couple made their home in Napa where they raised two children, Lynette and David. Ray spent more than twelve years with the Napa Fire Department as a ladder truck driver and afterward spent more than fifty years as a licensed contractor building and remodeling homes throughout Napa and surrounding communities. Ray built the first family home on Larkin Way in Napa and in 1976 completed their current home on La Homa Drive. Ray did additional coursework in architecture at Napa College—always willing to follow his interests and learn new things. Donna remembers “Ray could do anything, he had a brilliant mind!” Ray was a talented, skilled craftsman and a valued local gunsmith. He had a keen interest in muzzleloaders and was known for his expertise in fabricating replacement parts for these old firearms. Ray enjoyed woodworking—repairing and making new stocks for old firearms as well as designing and fabricating all the cabinetry in his daughter’s home. Ray also relished the time he could spend outdoors—on horseback usually hunting deer, elk,and antelope through the wilds of Utah and Wyoming. Ray’s family remembers him as a loving husband to Donna and a proud and good father and grandfather. Ray was preceded in death by his beloved parents and by his brother Gene. He is survived by his dear wife of fifty-seven years, Donna Rae Fortenberry; two children: Lynette Lundeen, her husband Jeff, and their two children; and David Fortenberry and his wife Renay; sister JoEllen Fortenberry-Ford and her husband James. A private family committal service will be in Tulocay Cemetery’s Garden Mausoleum. A celebration of Ray’s life will be held at a later date when times are better. The family would be pleased if contributions were made in Ray’s memory to any organization of aid to those suffering with dementia or Alzheimer’s . Treadway and Wigger Funeral Chapel is serving the Fortenberry family and friends may relay condolences online at treadwaywigger.com

The family of Ray Fortenberry created this Life Tributes page to make it easy to share your memories.

Send flowers to the Fortenberry family.