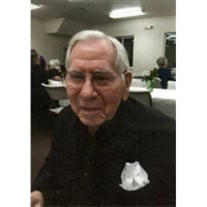 Our father who now is in Heaven made his passage on Feb. 16, 2016. Ray C. Brown, affectionately called Pop by his family, friends and co-workers, pass away after a long illness and broken heart. Pop died peacefully deciding it was time to be with his Wife , our Mother, Thelma Brown. She had gone before him in October of 2015. Our Father, was born June 10, 1927 in Kansas City, Mo. Came to Vallejo California in 1944 wanting to join the Navy during World War Two. He was unable to because of health reasons. However that did not prevent him from making a life for himself and his family of the future. He met our Mother, Thelma they fell in love that lasted 71 years. Pop was a hard worker and provided what was important for the family to prosper. His three greatest attributes were belief in God, Love of family and the American Work Ethic. Pop became a founding member of New Life Tabernacle, his faith. He was a valuable employee of a business here in Napa, Stucco/Cultured Stone, started by his two brothers Garret and Floyd Brown. His work ethic allowed him to retire from this business after 30 years. It was here at work that Ray got the Moniker Pop as he was well loved by his fellow employees. It was his love of family, friends, and co-workers which endeared all to himself and his personality. Where ever Pop went, his smiling blue eyes, his sense of humor, his capability to engage each individual as a person, showed how he truly loved people and life. Pop loved to hunt, fish, camp, laugh and later the game of golf. He loved life and all that it brought to his self, family, and friends. He is survived by: Son David C. Brown (Kathy) Napa, Daughter Gloria J. Conley (Gerry) Oregon, Daughter Deborah A. Johnson (Dan) Napa, Deceased Daughter Linda M. Coppinger Napa. He had nine Grandchildren and five Great Grandchildren. We the family, Pop's family will celebrate his life at a Memorial Service on March 19, 2016 at 1:00 pm. at New Life Tabernacle 2625 First Street, Napa, Ca. Join us in celebration of Our Father, Pop. Treadway & Wigger Funeral Chapel is serving the family of Mr. Brown

Our father who now is in Heaven made his passage on Feb. 16, 2016. Ray C. Brown, affectionately called Pop by his family, friends and co-workers, pass away after a long illness and broken heart. Pop died peacefully deciding it was time to be... View Obituary & Service Information

The family of Raymond Clifford Brown created this Life Tributes page to make it easy to share your memories.

Send flowers to the Brown family.