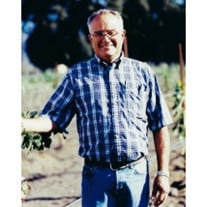 Richard John Duarte 1937 - 2016 Long time Napa Valley grower Richard John Duarte passed away on November 21, 2016 at home in Napa California with his family by his side after a courageous battle with cancer. Born to Manuel and Mary Duarte on July 30, 1937 in Oakland California, his family moved to Oakville California when he was six years old. While a teenager he started working alongside his grandfather and father in the vineyards around the Napa Valley learning the craft of viticulture at Vineyards Inc. one of Napa Valley's first vineyard management companies. After graduating St. Helena High School in 1956 he left the Napa Valley to serve in the Navy. Upon completing his service to our country he returned to Oakville to continue his work in viticulture. On April 24, 1959 he married Velma Jean Bradley of Napa. In 1971 he became the proprietor of Vineyards Inc. when he purchased the vineyard management company from Mac McCord. During the 60's through the early 90's he had the privilege to be the steward for some of the great vineyards in Napa Valley such as Martha's Vineyard, Bosche, Hewitt, Vine Hill and Moffitt. His commitment to quality provided a foundation for wineries like Heitz Cellar, Beaulieu Vineyards, Mondavi, Freemark Abbey, Duckhorn, and Cakebread to produce some of the valley's legendary vintages. One of his prized accomplishments was growing the grapes that were used to produce the 1974 vintage of Martha's Vineyard which was named one of the top 12 wines of the 20th century. In retirement, after the passing of his first wife he reconnected and married Donna Lauritsen, an old high school sweetheart on July 30, 2001. He enjoyed traveling, fishing, horseback riding, and providing viticulture guidance to Popie Wines, his son's Placer County winery. He is preceded in death by his parents Mary and Manuel "Manoel" Duarte, Sister Dorothy Reis and Brother Gilbert Duarte, First Wife Velma and Second Wife Donna Lauritsen. He is survived by his daughter Nancy Duarte, Son Michael Duarte (Lisa), Son David Duarte (Carol), Stepson Bobby Lauritsen (Cheryl), Stepdaughter Jody Brady (Tim); Grandchildren R.J. Lauritsen (Kelly), Jason Lauritsen (Rosa), Teresa Tam (Travis), Sara Bram, Megan Duarte, Kevin Duarte, Kelly Brady, Riley Brady, Baily Brady, Seth Duarte, Sophia Duarte; Great grandchildren Kelsey Lauritsen, Audrey Bram, Taylor Lauritsen, Adam Bram, Edwin Lauritsen, Eleni Lauritsen, Tyler Tam and Renzo Lauritsen. The family will have a private burial. A celebration of life will be held on April 8th, 2017 at 11 AM at the Ranch House located at Grgich Hills Cellar in Rutherford California. In lieu of flowers, donations can be made to the University of California San Francisco Oncology Department or American Brain Tumor Association. Treadway & Wigger Funeral Chapel is serving the family. Funeral Home: Treadway & Wigger Funeral Chapel 2383 Napa-Vallejo Highway Napa, CA US 94558

Richard John Duarte 1937 - 2016 Long time Napa Valley grower Richard John Duarte passed away on November 21, 2016 at home in Napa California with his family by his side after a courageous battle with cancer. Born to Manuel and Mary Duarte... View Obituary & Service Information

The family of Richard John Duarte created this Life Tributes page to make it easy to share your memories.

Send flowers to the Duarte family.