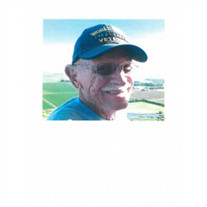 Born on September 16, 1926 Died on January 8, 2016. World War II Veteran. Born in Dubuque, Iowa to William Mullen and Florence (Hess) Mullen. At age 8, his family moved to California and settled in Pomona. He graduated from Pomona High School in 1944 and enlisted in the United States Navy. During World War II he served aboard the destroyer, USS Furse DD882. He was trained as a sonar operator but spent his time on the bridge steering the ship. He was discharged in May 1946. He went to work with his father and was initiated into the Plumbers Union Local 398 by his father, William Mullen, on Feb 7, 1947, making Bob a 4th generation plumber. He met his wife-to-be, Dolores (Dodie) Burkett in Pomona; they were married September 28, 1946 in Las Vegas, NV. They had four children, William, James, Michael and Robert. After the war, Bob took flying lessons and received his pilot's license in 1947. He was also interested in race cars and purchased a MG-TD. He enjoyed racing for a number of years. When the racing slacked off, he decided to try drag racing. He designed and built his own dragster in 1955. He and his pit crew drove to Kansas City, MO for the Second NHRA Nationals in Kansas City in 1956. He won his racing class "X Four Cylinder", setting a new national record that he still holds. He continued to win races in California and was never defeated In 1959 he became an awesome Boy Scout Master for many years in Troop 13. He retired and later accepted leadership in Troop 321 until 1963. There were many happy memories guiding young boys into emerging adulthood. There were nine young men who became Eagle Scouts under his guidance. Summers were spent camping with the family and after retirement he spent many years traveling, pulling a travel trailer, and enjoying life with family and friends. He moved his family to Northern California in 1965 and lived in Napa, CA for many years. He retired from the Plumbers and Pipefitters Union Local 343 in Vallejo, CA. He lived to be a 68 year member. His wife of fifty years died in 1996 and Bob moved to American Canyon, CA. He met Sammie Davis of Vacaville, CA and they enjoyed life and traveling together for ten years. In September of 2009 he eloped to Carson City, NV and married his second wife, Kathy Bonebrake. He is survived by his wife, H. Kathleen Mullen, three sons, James (Helga) Mullen, Michael (Vickie) Mullen and Robert Mullen, sister, Judith (Tom) Cooke, 5 grandchildren (Thanks Sara) and 8 great-grandchildren. He was preceded in death by his wife Dolores, first born son, William and grandson Frankie Mullen. His was a life well lived. Bob loved his dogs, Casey and Molly. Donations may be made in memory to the Humane Society of Vallejo. No services are scheduled. Service: Napa, CA No services are planned.

The family of Robert Jerome Mullen created this Life Tributes page to make it easy to share your memories.

Send flowers to the Mullen family.