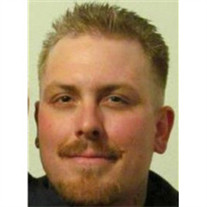 Sean Michael Horne died unexpectedly on March 28th, 2013, he was 26 years old. He is survived by many family members through birth and marriage. His Mother, Tammy Willard (Horne), Father Steve Horne & Sharon, brothers and sisters Brandon, Derren, Matthew, Ayla, Rebecca, James, Mathew, Andrew, and Leanna, his son Maverick and Mother Danyell Washburn, and the Washburn family, Mike, Terry, and Kristine. Sean was born June 16, 1986. He came out quick and never slowed down. Growing up he laughed and smiled often, and loved playing with his older and younger brothers. Sean grew up in American Canyon and attended Donaldson Way, AmCan Middle School, and graduated from Chamberlain High School. He played youth baseball at ACWV and youth basketball. He grew up attending Napa Valley Baptist Church with his family, where as a young boy in the AWANA program he learned about God's love and accepted Christ as his Savior in 1992. He loved to go to summer Bible camp and participate in the youth groups. At the age of 12 Sean became a certified SCUBA diver and enjoyed many trips to the ocean, along with camping trips with family and cousins. He loved to fish, and caught his first striper bass on the Napa River with a Mickey Mouse spin cast pole, and fish have been on the run ever since. His greatest catch as a young boy was a King Salmon on a river in Alaska, even though it really wasn't very big, it was King to Sean. He loved spending time with groups of family and friends, whether listening to music, just hanging out, or competing in the games of the backyard Olympics. Sean married Danyell, and together they had a son Maverick, a beautiful little boy that was loved and adored, affectionately known as "Mavy". A memorial service for Sean will be held at Napa Valley Baptist Church, 2303 Trower Ave in Napa, on Saturday, April 6th at 2:00 PM. A basket will be available at the service for donations that will be used to establish a trust fund for Maverick. Please share memories at treadwaywigger.com

The family of Sean Michael Horne created this Life Tributes page to make it easy to share your memories.

Send flowers to the Horne family.