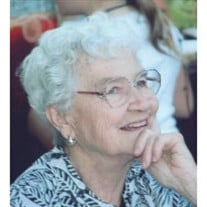 Longtime Napa resident, Virginia (Ginny) Annie Kresge, passed away on May 6, 2018 surrounded by her loving family. Ginny was born in Bethlehem, PA to Lawrence Earl Noll and Carrie Consuela Engler on June 19th, 1925. She grew up in Bethlehem, graduating from Liberty High School in 1943 and then St. Lukes Hospital School of Nursing in 1946, followed by a Bachelor of Science from the College of the Holy Names in 1971. Ginny met Richard Wesley Kresge while he was on leave from the Navy during World War Two and they married on March 24th, 1944. Richard was a graduate of Moravian College and earned a Masters degree in History from the University of California, Berkeley. Throughout Ginnys career, she enjoyed bedside nursing as well as long-term care in geriatrics, which led to her work at the Veterans Hospital in Yountville, CA. She received personal satisfaction from working with this population who were so often misunderstood. Ginny worked for the transformation of attitudes in the care and needs of the elderly, emphasizing their individuality, personal medical requirements and desires. Ginny and Richard enjoyed raising their three children, camping while exploring the United States, as well as golfing. Ginny prided herself on providing a warm, welcoming home for her family and their friends. Throughout her daily life, Ginny used her personal gifts and attributes to help others fulfill their life goals. Ginny was a great believer in the power of education. As a result, she was a member of the nonprofit organization, American Association of University Women, which promotes equity and education for women. This organization led to her civic work at "The Table" in Napa. Ginny loved all music and participated in Faculty Wives Choral Groups. She loved baking, swimming, sewing, singing, playing bridge and especially gardening. Richard Kresge preceded Virginia in death in July of 1998 after fifty-four years of marriage. She is survived by her three children: Jeffrey (wife Jennifer), Sheridan "Sam" (wife Raylene), and Sally (husband Ron Johnson). She has ten grandchildren and fifteen great-grandchildren. A Celebration of Life will be held at the Treadway & Wigger Funeral Chapel on June 24th, 2018, at 10:00 followed by a reception at Napa Valley Country Club at 11:30. In honor of Ginnys commitment to education and equity, in lieu of flowers, memorial donations can be made to the American Association of University Women. Please make checks payable to AAUW, PO Box 98045, Washington D.C. 20090-8045. Online donations can be made at AAUW.org. Funeral Home: Treadway & Wigger Funeral Chapel 2383 Napa-Vallejo Highway Napa, CA US 94558

Longtime Napa resident, Virginia (Ginny) Annie Kresge, passed away on May 6, 2018 surrounded by her loving family. Ginny was born in Bethlehem, PA to Lawrence Earl Noll and Carrie Consuela Engler on June 19th, 1925. She grew up in Bethlehem,... View Obituary & Service Information

The family of Virginia "Ginny" A. Kresge created this Life Tributes page to make it easy to share your memories.

Send flowers to the Kresge family.